See What Teens Say About New YA Lit

May 15th was suppose to be the last time that Bookmarked members were going to be published in SLJTeen. Our editor, Dodie Ownes, months and months ago asked me if the group would continue to write for the on-line newsletter. It is stressful meeting deadlines, but the students were all for it. They thought it was an honor to be asked. If the reviews were not written so well, they would not have been invited to keep going. Here are the latest reviews from Bookmarked. They will continue to write over the summer. You can find a link to all of the reviews written since May of 2012 here.

Posted by Elizabeth at 8:15 AM No comments:

Gearing Up for the Move to the West Bank 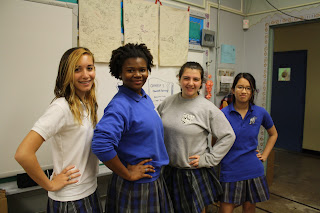 Looking good in the picture above are the new officers of Bookmarked, the high school library book group, for 2013-14. The group has always had sort of a love/hate relationships with officers. The current members decided that they really wanted officers and wanted to give each job a special name.  This is the first time in six years that the group has had a full slate of officers. The president is the Author, the vice president is the Book Binder, the secretary is the Publisher and the last office which is not treasurer (not sure what their role will be). I am looking forward to some intense book discussions during our Monday lunch meetings. 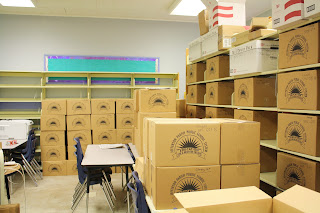 Preparing for the big move to 701 Churchill Pkwy, Avondale, LA. I still can't believe it is going to happen. All 6700 books had to be packed. That part is done. Now I am down to the what do I keep, what do I give away and what do I throw away. I put two big boxes of give-aways out in the hall. Every time I throw some books in there, the students grab them. I have some really good titles that I need to make disappear from the library. I had lots of duplicates that I just don't want to put on the new shelves. It felt good to give the students some good reads for the summer break. 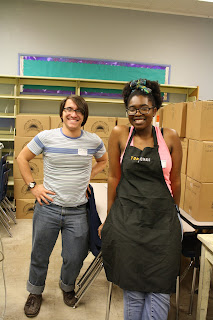 Packing and handling all the other jobs that I do at the end of the year was causing me extreme stress. Once graduation was over and all the AP tests had been administered, I could really begin to pick up the pace of my packing. I had started inventory in March and packing the professional collection. However, I just knew that if I started packing the general collection way ahead of time, invariably that would be the section of books that the students needed. So this week I was able to enlist the help of a couple of PFTSTA alums who had finished college for the semester. They were happy to come to school and give me a hand. It gave us a chance to catch up while actually getting something constructive done. In the picture above are Chad Landrum, who recently graduated with honors from Loyola University New Orleans, and Enjoli Gilbert, who just finished her sophomore year at Loyola. Both of them are former members of Bookmarked. They spent lots of quality time in the library while in high school. I think that they might have been a little sad to see the end of the postage stamp library. I could never have done it without them. I really hope that they might have some time at the end of the summer to help put books on the new shelves so that they get a chance to get a feel for the brand new space.

Posted by Elizabeth at 8:32 PM No comments: 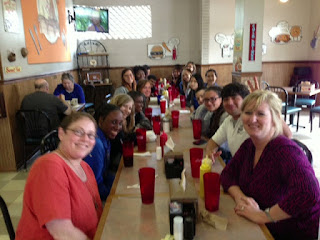 On April 29th, Bookmarked, the high school library book group, walked down the street for an end of the year celebration at Dot's Diner. Next year, when we move to the new building, there will be no restaurants within walking distance. So this was one of many of the lasts that we had at PFTSTA throughout May. I am on the left, and our principal, Jaime Zapico is on the right. Behind us you can see all the members of Bookmarked stretched all the way to the wall. It makes my heart sing to have that many students who are interested in reading. Every year I worry the club will drop to nothing, but we always seem to have students who want to join. 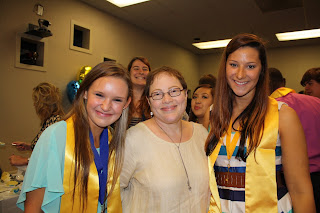 It is always bittersweet to say goodbye to the graduating seniors. The above picture is from our senior awards night that was held on May 2nd. I am flanked here by the two senior members of Bookmarked. Courtney on the left has been in the group for three years, and Emmalyn on the right for two years. I am going to miss both of them. Courtney was head of the group and helped me make a banner for every author visit that we had this year. Both girls are going to continue to read and write reviews for SLJTeen over the summer before starting college. Peeking through the back on the left is Alana, a former member of Bookmarked, and Emmalyn's sister.

One of the jobs that I have at PFTSTA is to sponsor the weekly Taylor Tube episode that highlights events and activities throughout the school. A group of students film and edit the program, and it is shown on Fridays during the study hall period. The last episode of the year was a sweet goodbye to our deteriorating campus. I thought that you might enjoy seeing what our school actually looks like:

Posted by Elizabeth at 7:39 AM No comments:

Email ThisBlogThis!Share to TwitterShare to FacebookShare to Pinterest
Labels: Bookmarked, End of the Year, pftsta

Check out the reviews that members of Bookmarked wrote for the April 30th edition of SLJTeen.
Open here to read the reviews.
Posted by Elizabeth at 7:00 AM No comments:

A couple of years ago, I came up with something for April that I called Hidden Poetry, but we didn't have time to do it last year and resurrected the activity for 2013. During National Poetry Month, I email a poem every day to all the students and staff of PFTSTA. Hidden Poetry allowed me to have a more interactive activity using poetry. First, I collect poems from students. I asked them to  send me a poem that they either wrote or a poem that speaks to them by any poet living or dead. I collate all the poems then print them on different colored paper. Students helped me cut out the poems, roll them and tie them with a ribbon. Then one day after school, the students hide the poems throughout the building. The next day, when a student finds a hidden poem, they bring it to the library. I ask them to read the poem to me and whoever is in the library, and then I reward them with a candy prize. All the poems are put onto a bulletin board as I collect them, so that everyone can read them. This year the middle school students really got into the whole event. They were so excited to show off the poems that they found. We put out a little over 100 poems, and students were allowed to bring me one poem each. I was very pleased with the outcome of this event, and I need to make an effort to make sure it happens again next year.
Posted by Elizabeth at 9:42 PM No comments: