Showing posts from November, 2010
Show all

Vacation Over, Back to Work

I took my vacation from school seriously and have not posted here in a week. However, I have been reading. Let me share some good reads with you. I started Chains by Laurie Halse Anderson before she visited us at Taylor. Unfortunately, I did not finish it until a few days after she left. I have read several of her other books, but I thought that it was very important for me to read this one because I had not read one of her historical fiction stories before. She was on the book tour to push the sequel to Chains called Forge, but I have not read that one yet. Laurie's story about slaves during the period of the American Revolution reminds me of Octavia Nothing by M. T. Anderson (no relation to Laurie). We don't usually think about slaves living in the colonies of New England, but they did. Both the Chains series and Octavia Nothing series offer a glimpse into that life. I had read some good reviews of Bruiser , and I am a fan of Neal Shusterman so I was excited to read t
Post a Comment
Read more 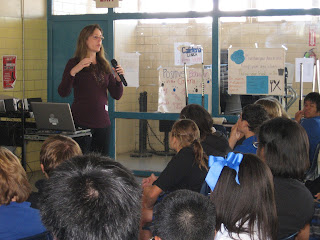 On Thursday, November 18th, the students were given a history lesson by fiction writer, Laurie Halse Anderson. Her Seeds of America series focuses on two slave teenagers in New York during the American Revolution. We foiund out that the third book in the series will be called Ashes and be from two characters point of view. Ms. Anderson gave the students background on the Revolution that she discovered in her research for the books. She told true stories that made the history come alive for the kids. The students loved her descriptions of how she actually cooked a rabbit over an open fire and walked in the snow covered woods in woolen socks, dressed in only the layers that the soldiers had at Valley Forge. She discovered it was not easy to have been a soldier during that period. The author with librarian, Elizabeth Kahn. You can see more pictures on the PFTSTA Library website.
Post a Comment
Read more

The Edublog Awards Nominating a website for an edublogs award is an opportunity for educators to nominate the outstanding work of colleagues. Here are the categories in which I would like to nominate the following individuals: Best Teacher Blog--blanchetBlog: an online classroom community by Tinashe Blanchet --> http://blanchetblog.net/ Best Resource Sharing Blog--Free Technology for Teachers by Richard Byrne --> http://www.freetech4teachers.com/ Best Library Blog--The Big House Library Blog by Anna Koval --> http://www.bighouselibrary.com/blog.html Best Group Blog--Yalsa Blog: the official blog of the Young Adult Library Services Association --> http://yalsa.ala.org/blog/ You can make your own nominations by visiting the homepage at EduBlog Awards .
2 comments
Read more

One-upping the Web: Finding our place in Bloom's revised Taxonomy

November 11, 2010
I am always trying to keep up with changes in my field. I love what computers and technology can do in the classroom. It certainly makes teaching more fun for me, and around every corner there seems to be some new tool or resource that can help the students I teach. I probably learned about Bloom's Taxonomy from one of my very early education courses. I won't mention how long ago that was because I don't want to give away my age. I was fascinated by this article published in the November issue of School Library Journal . Bloom's can still be relevant today but in a modified state. I thought this article summarized it well. Please take a few minutes to read. One-upping the Web: Finding our place in Bloom's revised Taxonomy
Post a Comment
Read more

Fundraiser Kick Off with a Power Point

November 05, 2010
I wish that I did not have to have fundraisers in the library however, it is a part of the territory. I need money for programing, and students are always asking for new books. I kicked off this year's event with a six minute powerpoint presentation that I narrated. Each Advisory teacher played the powerpoint during the Advisory period. I sat with two groups as they watched me talk about how the fundraiser will work. It is a little different this year because the students will take orders now, but no one pays until the items are delivered sometime in January. The kids seem excited about the prize package, and I hope that I can double what I raised last year selling just magazines. You can still renew your magazines by ordering online. Or visit the website to see what else we have for sale: http://store.gafundraising.com/  and enter the school code: 1479302 . If you want to read more about the fundraiser, visit the library website here: http://bit.ly/ayc2LT .
Post a Comment
Read more
More posts