Showing posts from December, 2015
Show all

Happy Holidays from BRiMS and Bookmarked

December 16, 2015
I run two book groups at Patrick Taylor. My high school book group, Bookmarked , was created in the fall of 2007 which was my second year as librarian at the school. The students really wanted a library club, but the square footage of the library was so small that I could not imagine how any students could do any actual library work. Instead I created a book discussion group. Not only did we meet to talk books, but I tapped these students to help me with fundraisers and special programming like Teen Read Week. Helping me with these special activities seemed to appease the members. I waited until February of 2009 to institute a book discussion group for my middle school students called BRiMS, or Books Rule in Middle School . Both of the groups meet during lunch, and this year, the school added a third lunch. Now BRiMS is made up of only 6th and 7th graders. Bookmarked has 8th-12th grade students. This has actually worked well because in 2014 and 2015, Bookmarked lost a lot of members w
Post a Comment
Read more

Sharing Resources for a Conference Presentation 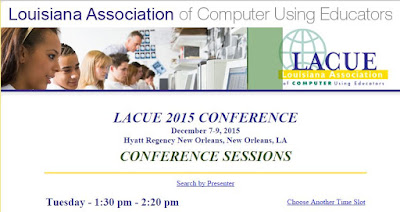 When I go to a conference, I hate when someone hands me a sheet of paper with a list of links. What do I do with that paper? Usually, during the presentation, I will mark the sites on the paper that might be useful to me, my teachers, or my students. Then I have to bring the sheet of paper back home or to school and sit and type out all the URLs so that I can see if the sites really do interest me as something that I want to save. If I like what I see, then I save them in  Diigo   and add lots of tags to each site so that I can find them again  at a later date. This is time consuming, and I have found that it may take me months to find the time to sit and go through all the websites. What a waste of time for me. I appreciate when you walk in to a conference session and are handed a paper or card with a link or QR code that points you to a website with all the resources that the presenter will discuss during their talk. I can open the resource site on my iPad during the session a
Post a Comment
Read more 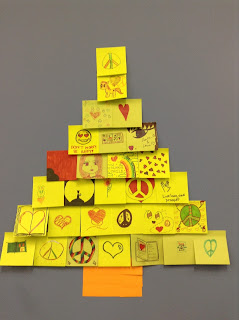 Tree of Peace & Love I work in southern Louisiana where many people working in public schools don't understand the separation of church and state. Thirty years ago I remember being horrified when the principal read a Christian prayer over the intercom right before the holidays. I didn't say anything because I was young and was not going to antagonize my principal, but I did not think that it was appropriate. Many of the public schools where I have worked have had Christmas trees gracing the halls. Those were usually decorated with ornaments created by the students. The halls of many of these schools had other Christmas style decorations, too. View image | gettyimages.com I would compensate by bringing in a menorah for the library. I would also have dreidels available with instructions on how to play. The students loved playing the game even if they didn't win any chocolate. The librarian in this library (not mine) found a way to make an
6 comments
Read more
More posts