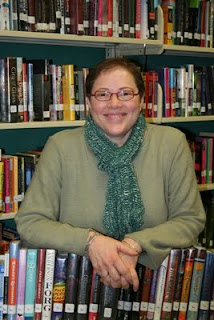 I became a school librarian in 1991 and finally retired from education in August of 2022. I won't tell you how long I taught because that would give away my age. I worked at the elementary level for 12 years. I loved working with the little ones and telling stories, using puppets, singing songs, and getting the kids excited about books. However, there comes a time when we need to change to grow. From 2003 until I retired, I worked with students at the middle and high level.

In 2006, I was hired to create the library at Patrick F. Taylor Science and Technology Academy in Avondale, LA, a suburb of New Orleans. Taylor serves about 800 students in grades 6th - 12th. The school is part of the Jefferson Parish school system and one of the only STEM schools in the district. In 2010 and 2019 Patrick Taylor was given the title of Blue Ribbon school by the US Department of Education. Louisiana has continued to rate the school an A. The school has continued to rank in the top three in the state and top two in the district over the last several years .

While at Taylor, I have won three separate grants from the Laura Bush foundation to stock the shelves with quality material. I also received a Beyond Words grant from Dollar General and the American Association of School Librarians. In 2007, I won a visit with author, Tiffany Trent, in a contest sponsored by The Young Adult Library Services Association, a division of  the American Library Association. Also, the Young Adult Library Services Association selected Bookmarked, my high school library book group, to participate in the YA Galley program for 2010-2012 and 2013-2014. In March of 2011, the Louisiana Association of School Librarians named me the School Library Media Specialist of the year. In October of 2011, I received, along with English teacher Lisa Valence, the Gale TEAMS Award for Middle School. I was named the Region I Educator of the Year by the Louisiana Association of Computer Using Educators (LACUE) in November 2011. In June of 2012, I received the Information Technology Pathfinder Award from the American Association of School Librarian (AASL), a division of American Library Association. In June of 2013, along with English teacher Lisa Valence, I received the Technology Innovation Award from the Special Interest Group Media Specialists (SIGMS) of the International Society of Technology in Education (ISTE). I was named a 2014 Fund For Teachers' Fellow along with four teachers from Patrick Taylor Academy as members of a team. In the fall of 2014, I became an ambassador for Infogr.am. I received a University of Chicago Outstanding Educator Award in 2014.  I was named a 2016 Local PBS LearningMedia Digital Innovator for Louisiana. In March of 2018, I won the James O. Modisette Middle/High Award for excellence in library programs from the Louisiana Library Association. I was named an ambassador for Wakelet in June 2020. I was on the AASL Best Digital Tools Committee from 2020 to 2022 and was on the AASL Best Website Committee for two years before that. In May of 2022, I was named a Coca Cola Distinguished Educator and was selected for this award by a student. For 2022-23, I am chair of the AASL Frances Henne Award Committee. Since January 2012, I have been reviewing books, apps and digital resources for both School Library Connection and School Library Journal. I have served on the Louisiana Teen Reader's Choice committee with the Louisiana State Library from 2015 to 2022. I am a long time member of many professional organizations including: LASL, LLA, YALSA, AASL, and ALA and at various times have been a member of LACUE and ISTE.

I am passionate about reading young adult literature, and I loved working in a school library.


Links to content written by me or about me: