Showing posts from September, 2013
Show all

School as been in full swing for a month and a half, and new books have been pouring in from the publishers. The students have been ecstatic with the new arrivals. Here are four reviews of the newest works from some established authors: open here to read the teen's reviews .
Post a Comment
Read more

Authors Han and Vivian Tell Tales of Friendship and Collaboration 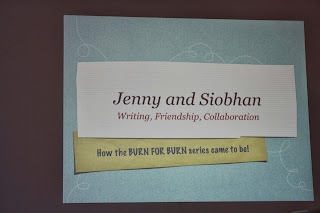 On Thursday at 9AM, the sophomores and juniors gathered in the common area to hear how authors Jenny Han and Siobhan Vivian became friends, writing buddies and eventually collaborators. They met and became friends when they attended the New School in New York City where they studied writing for children. One of their teachers was editor and author, David Levithan. I thought that was way cool.  When they began their writing careers, both were living in New York. They would meet at a coffee shop, write and trade pages for critiquing. They knew that having an objective reader was key to becoming better writers. Then Siobhan moved to Pittsburgh to teach and write, but they remained friends. They believe that they have different strengths with Jenny excelling in character development and Siobhan at telling a story. They decided it would be fun to work on something to together to play on their strengths and the Burn for Burn series was born.  They spent years developing the co
Post a Comment
Read more

Lots of YA Authors Visit Town 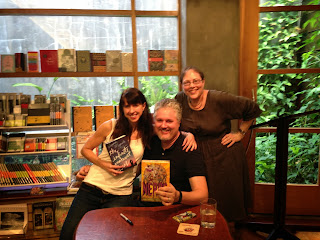 Lauren Myracle and Michael Buckley with their newest books, and the Loud Librarian on the right Ya Authors: Lauren Myracle, Siobhan Vivian and Jenny Han
Post a Comment
Read more

Take a Video Tour of the New PFTSTA Library

September 17, 2013
There are still some details left to be completed in the new library, but it has been open and running full speed for the last few weeks. There have been author visits, classes taught, books checked out, studying done, and meetings held among the many activities held in the space since the library first opened on August 22nd. On Thursday there will be the first faculty meeting ever held in the school's library.  I created this video so you could see the space for yourself. The president of Bookmarked gives you the grand tour.  PFTSTA Library Tour from Elizabeth Kahn on Vimeo
Post a Comment
Read more

Two Amazing Authors in One Week 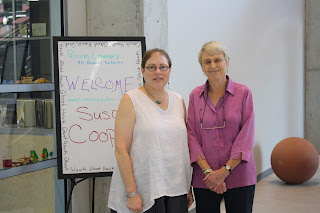 Susan Cooper is on the right  Students pose with Walter Dean Myers on the screen PFTSTA hit the jackpot this week, when Susan Cooper visited the 6th and 7th grade students to talk about her newest work, Ghost Hawk, and Walter Dean Myers skyped with members of the high school book group and other interested high school students. Both Walter and Susan have been in the writing biz for a long time. Both of them see no retirement in their futures as they love writing and plan to keep at it for as long as possible. Susan's newest book is set on and near the island where she lives in Massachusetts. She says that the island hasn't changed much since the ice age. Europeans have been in America for only 400 years, and the Native Americans have been living in the area for thousands of years. When the Europeans first arrived, there was more friendship between the two groups, but by the late 1600s there was an horrific war. She wanted to explore why this might ha
Post a Comment
Read more

In the September 4th edition of SLJTeen , two teens write about authors that they adore. Fred got to meet Gina Damico, author of Rogue , when she visited PFTSTA in the fall of 2012 . He was jumping up and down all over the library when the third book in her series arrived. You can read his review to see if it met his expectations. Destiny loooooooves Rainbow Rowell, and she eagerly grabbed Fangirl when she saw the ARC in one of the boxes from the publishers. Read her review to find out if her love affair with all books by Rowell continues. Paris writes about After Eden by Helen Douglas. You can find all three reviews right here .
Post a Comment
Read more

Haddix and McMann Energized the 6th and 7th Grade Students 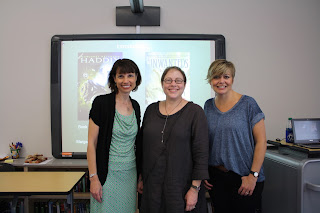 The happy librarian is in the middle flanked by Haddix on the left and McMann on the right  On September 3rd which was the Tuesday that we returned from the Labor Day holiday, we had the first author event ever in the new library. For this event, we were lucky to score two authors, Margaret Peterson Haddix and Lisa McMann . They are touring together because the newest books in their series came out the same day, Risked and Island of Fire respectively. It happened that their visit to our school was their first stop on this tour. The two authors have toured together before, so they were very comfortable with speaking together. I think that we hit the jackpot. The kids were thrilled with them and have been clamoring to check out their books ever since they left us.  Margaret began with a book trailer. Then she explained how her book Among the Hidden was not suppose to be a series, but readers kept asking her what happened to Luke that she decided to continue the story
Post a Comment
Read more 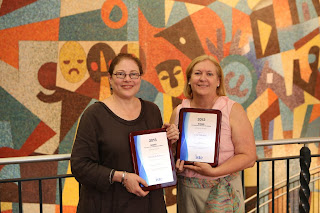 Lisa and I won our awards from ISTE in June, but we were just recently acknowledged on the website for the Jefferson Parish Public Schools. You can read all about it here. All the 2013 ISTE award winners are pictured here with the president, Kecia Ray, standing in front. You can find me standing on the second row, second from the right.
Post a Comment
Read more
More posts