Two Amazing Authors in One Week

PFTSTA hit the jackpot this week, when Susan Cooper visited the 6th and 7th grade students to talk about her newest work, Ghost Hawk, and Walter Dean Myers skyped with members of the high school book group and other interested high school students. Both Walter and Susan have been in the writing biz for a long time. Both of them see no retirement in their futures as they love writing and plan to keep at it for as long as possible.


Susan's newest book is set on and near the island where she lives in Massachusetts. She says that the island hasn't changed much since the ice age. Europeans have been in America for only 400 years, and the Native Americans have been living in the area for thousands of years. When the Europeans first arrived, there was more friendship between the two groups, but by the late 1600s there was an horrific war. She wanted to explore why this might have happened, and what would life be like if there was a friendship between two characters from each side. Susan came to us courtesy of her publisher, Margaret K. McElderry Books and Simon and Schuster, as well as local bookstore, Octavia Books of New Orleans. 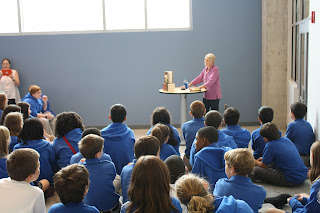 Eighteen months ago, I received word that I had won a skype visit with the National Ambassador for Young People's Literature, Walter Dean Myers. At the time, I was pleased, but I didn't really think that September 11, 2013 would ever arrive. It did. I invited all the members of the high school book group as well as any other high school students who were interested to join us. There were about 30 students who attended the skype. Walter was gracious and funny and seemed to know just what to say to entertain the students. He explained that he loves writing so much that it never feels like a job to him. One of the students asked what motivates him everyday, and he said that he is as motivated to write as you would be motivated to eat ice cream. He has a writing routine that he follows diligently. Even when he travels to London at the end of this month for five weeks, he plans to write his five pages a day from 5AM until 9AM. Then he will wake up his wife and go see the sights. He tries to see as much theater as possible when he is there along with visiting friends and the sightseeing. He emphasized the importance of finding something that you love to do.

You can find more pictures of both events on the library website here.