Showing posts from March, 2016
Show all

Teen TECH Week 2016 Brought Many to the Library 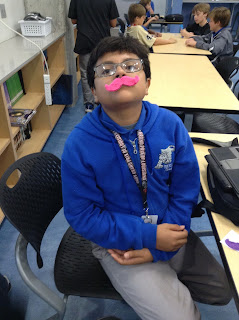 Sporting one of the prizes for the Fast Finger Search Our school has grown exponentially since we moved into the new building three years ago. This year was the first time that three lunches were needed in the schedule. With three lunches, I have lost the ability to have the older students help with the activities for the 6th and 7th graders. While the 6th and 7th grade are at lunch the 8th-12th grade are in the middle of 3rd period and vice versa. Before we just flipped study hall and lunch for all students, so I could get the older students out of study hall to volunteer in the library for the little ones. Lunch everyday is a very long process. The 6th and 7th grade go to lunch at 11AM and the 8th graders don't finish lunch until 1:10PM. I am open every day for all lunches unless there is a class scheduled with me. Selecting a signed ARC by last week's visiting author for his prize Even though I would be sailing solo, I still wanted to have a robust slate of acti
Post a Comment
Read more

I got a chance to pose with Raymond Arroyo just before he left A couple of weeks ago, Judith Lafitte, from the local independent bookstore Octavia Books , and I were lamenting the lack of authors for tweens and teens traveling to New Orleans this past year. Since 2010, Octavia has sent many authors to my school to make presentations to the students. In October, we had someone scheduled who eventually had to cancel due to a family emergency. We were crushed but certainly understood. Since there are only two and half months left of the school year, I thought that this would be a year of no face to face author visits. The day after that phone call with Judith, she sends me an email saying that Raymond Arroyo, a native New Orleanian, would be visiting the bookstore and wanted to do a school visit.  Even though I had little time to prepare, and I was out of the building two days last week for a conference and ended up out of school a third day due to weather, we were th
Post a Comment
Read more 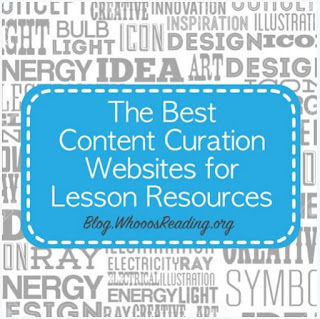 Blog post here I was asked to write another blog post for the WhooosReading blog on a topic of my choosing. Again, I coordinated my content to a presentation that I would be making to librarians across the state of Louisiana. That was last week on March 9th at the annual Louisiana Library Association conference . In the blog post for WhooosReading, I limited my description to four web tools that I use over and over in the collaborative lessons that I create with the content area teachers at my school.  Open here to read my post titled, "Top 4 Content Curation Websites for Lesson Resources."
Post a Comment
Read more

I usually like to participate in national events during the time that they are scheduled. This year Teen Tech Week (TTW) comes at a bad time for me. Two days this week, I will be attending the state library conference for the Louisiana Library Association. This is so inconvenient. At first, I thought of starting the celebration this week and finishing next week. When I mentioned this to some students, they said that is ridiculous, and so in the PFTSTA Library, we will celebrate TTW beginning on March 14th. Actually, I really liked that idea because it gave me some extra time to finish up the planning and to purchase the supplies.  All events are scheduled during the students' lunch periods. The last activity is online, and the students can participate anytime. I plan to post lots of pictures of the week on the library website here.   PFTSTA LIBRARY: All Reader’s Welcome Monday:                     Oscar Winning Animated Short Kick off Teen Tech Week and visit the
Post a Comment
Read more 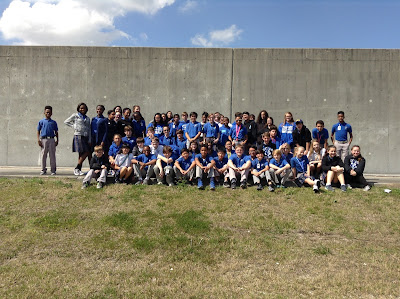 At the spot of the levee breach in the Ninth Ward  On February 29th, the seventh grade along with five teachers boarded two buses to head from Patrick Taylor to the Ninth Ward to participate in service learning and tour the area. We began this project several years ago when the students were asked to read Ninth Ward by Jewell Parker Rhodes. After reading the book, we realized then that the students had little understanding of how Hurricane Katrina affected this very low area of New Orleans. Three years ago, we added a service learning component.  Our first stop this year was Dr. King Charter School . It should have taken us 30 minutes to get there, but there was horrible traffic on the Crescent City Connection bridge crossing the Mississippi, and one of the bridges across the Industrial Canal was closed. It took us over an hour to get to the school. When we arrived, a third of the students entered the school library to meet the 1st grade, a third went to two kindergart
Post a Comment
Read more
More posts