A couple of weeks ago, Judith Lafitte, from the local independent bookstore Octavia Books, and I were lamenting the lack of authors for tweens and teens traveling to New Orleans this past year. Since 2010, Octavia has sent many authors to my school to make presentations to the students. In October, we had someone scheduled who eventually had to cancel due to a family emergency. We were crushed but certainly understood. Since there are only two and half months left of the school year, I thought that this would be a year of no face to face author visits. The day after that phone call with Judith, she sends me an email saying that Raymond Arroyo, a native New Orleanian, would be visiting the bookstore and wanted to do a school visit. 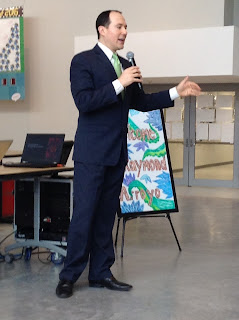 Even though I had little time to prepare, and I was out of the building two days last week for a conference and ended up out of school a third day due to weather, we were thrilled to meet Arroyo on Monday, March 14th. He is on the national news, but I was not familiar with him or his work before this. Will Wilder is his first book for kids though he has written many for adults. I have no clue how people who hold a full time job find the time to write. It takes me hours to compose any of the writing that I do, and I can't imagine starting a book much less finishing it. 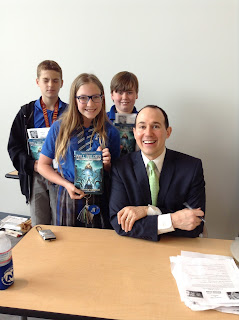 Arroyo spent seven years on his research in preparation for this series. He likes to compose detailed outlines so that even though the first book took many years, he will be able to complete each subsequent book in the series in less than a year because of his extensive outlining. 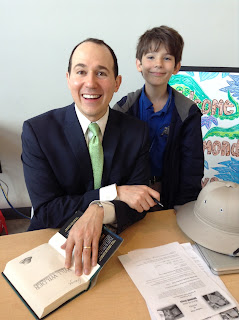 Will Wilder is an action adventure story with a hero who makes a tragic mistake and must figure out how to rectify it to save his town. This is just the kind of book that appeals to the eleven and twelve year olds in middle school. Arroyo spoke to the entire 6th and 7th grade at one time which included just over 200 students. Even though I was concerned that the students were not paying enough attention to the presentation, later that day, many of them came up to me to ask when the library copy of the book would be ready for check out. I was thrilled to hear the students get excited about a book after an author visit. That is exactly what I wanted to hear.

I thank Judith for giving us the opportunity to meet Raymond Arroyo.
The students at PFTSTA ♥ author visits! See more pictures of the day on the library website here.