Bookmarked on the Radio: June 14th

On May 23rd, Susan Larson visited Taylor to make a recording for her weekly radio show, The Reading Life. This show airs on New Orleans local radio station WWNO 89.9FM every Tuesday at 6:30PM. Through pocasts we can listen any time. Our segment is going to air on June 14th. So I will post a link then.
I asked three students of Bookmarked to participate in this event. Two of the students had recently graduated so they are not in uniform. The other student is a sophomore, but will be our most senior member of the book group next year. Don't tell anyone, but she will probably be our next president.
I talked a few seconds about the history of the book group. The students talked about reviewing books for the YA Galley Program through YALSA, a division of ALA, as well as about attending the ALA annual conference which will be held in New Orleans in a few weeks. When they attend ALA, the 14 students that I am taking will have a chance to meet authors and speak at the Best Fiction for Young Adults Committee meeting. It is going to be an exciting day.
Posted by Elizabeth at 5:33 PM No comments:

I am a big fan of Gary Schmidt and his Wedneday Wars which takes place during the Vietnam era and tells a wonderfully poignant story. So when someone handed me an ARC for his newest, Okay for Now, I was anxious to read it. I was not disappointed. This story also takes place during the Vietnam era. The main character, Doug Swieteck, must start 8th grade at a new school, in a new town. He hates stupid Maryville, NY. He struggles with an abusive father and brother. His mother tries, but she cannot erase the pain that his father causes. As the story unfolds, we watch him make friends, get a job, become an artist and learn to read. Through all of these highs, he must learn to live with many lows caused by his dysfunctional family.
What an amazing character he is. I love him. This is just one of those great middle school reads that I will recommend over and over again.
Posted by Elizabeth at 1:21 PM No comments:

Sharing a Book with Visiting Students 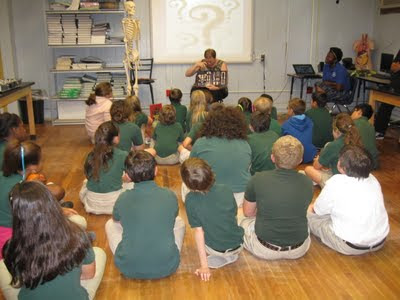 Science teacher, Katie Higgins,  planned Science Extravaganza II last week.
Again, I got to read stories to a group of 5th graders. Love it.
Here is a pic of the event.
Posted by Elizabeth at 7:37 AM No comments:

On Tuesday afternoon, the last full day for seniors, we had an author visit. What a crazy time to schedule an author event, but of all the authors that visited this year, Katie Crouch was the first one who wrote for older students. I wanted the juniors and seniors to have the opportunity to meet an author that all the other students at Taylor had.

Katie Crouch is the author of several adult books, but she was touring for her first YA novel, The Magnolia League. This book takes place in Savannah, GA. Katie grew up in Charleston and uses her upbringing as a backdrop to her stories. She never did make her debut, but attended classes in anticipation that she would be a debutante. The debutante society is a large part of this book. As 16 year old Alex must move from northern California after her mother dies to Savannah where the grandmother she never knew holds a very high place in society. Alex is expected to follow in the plan her grandmother has for her. Reluctantly she does until she discovers that their is some mystery surrounding all the members of the Magnolia League. Why do all the women look so young, have large bank accounts, and never seem to leave Savannah? You will have to read the book to discover the mystery.

Here is a photo of me with the author. I am the one with the glasses! 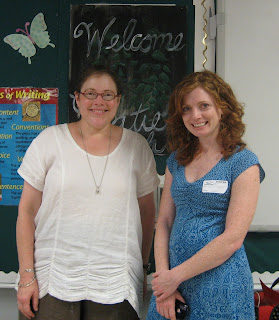 If you want to see more photos of this visit,
check out the PFTSTA Library website here: http://bit.ly/eGDzNy
Posted by Elizabeth at 6:37 PM No comments:

School is (Almost) Out for Summer!

I just wanted to share this picture.
Some juniors and seniors were hanging out together during lunch;
their last time ever.
The seniors's final day was today, and they got to leave school early.
Graduation is always hectic for me because I help with the senior awards night and the graduation ceremony.
The end of the road for the seniors is a mixed blessing:
I will miss them,
but I won't miss all the work it took to get them across the stage.
Posted by Elizabeth at 1:27 PM No comments:

Spring Break Means Too Much To Do

I try to post here at least once a week if not more, and I had planned to post before Spring Break which began for me at noon on April 21st. However, life got in the way. I have not visited this blog for two weeks. Actually, except for the occasional email and a couple of shopping trips, I did not get on the computer during my break. It was really liberating. I made sure to do some reading though.

First on my list to read during break was Miracleville by Monique Polak, who I have mentioned in my blog before.

Since we had such a fun email exchange, I thought that it was only fittng that I actually read one of her books.

It was a quick read that focused on a family living in a small Quebec town that caters to tourists who travel there to find miracles for their ailments and handicaps. The family owns one of the souvenir shops in town. The story is told from the older daughter's point of view. The story begins during summer vacation so both girls are home and available to help out in the family business. The summer proves to be quite an eye opener as Ani learns something about her past that her mother had hidden from the family, her sister Collette gets a boyfriend, and their mother finds out that she is going to need a miracle. I was not expecting such a strong religious aspect to the book, so I would want potential readers to know that up front.

The students in my library book group are very picky about what they will and will not read. I  don't always understand how they make their selections of what is and what isn't a readable story for them. If I am recommending a book, I try to give them the details that I think will help them decide if a book is read-worthy for them.

The other book that I read over break was the sixth in a series that I have been following for years.

I am a big fan of Jasper Fforde and his Thursday Next series. One of our Thursdays is Missing did not disappoint. At first, I thought that I would dislike the book because the main character in this one is the written Thursday not the real Thursday. Almost all the action takes place in the Book World. I liked the written Thursday, and the puns were flowing as usual. I don't think that this book stands alone. You need to have read the previous titles to understand what is happening as he gives little back story to the characters. If you are a fantasy fan who likes humor and is willing to wade through the numerous play on words then this is a series for you.
Posted by Elizabeth at 8:18 AM No comments: