Showing posts from October, 2012
Show all

On Saturday morning, October 27th, eight members of the high school book group, Bookmarked, met at school to head off to Baton Rouge to attend the annual Louisiana Book Festival. This was the first year that the festival committee had invited three authors of young adult literature to present. I thought it would be a great opportunity for the teens to see the state library, the state capital and immerse themselves into all things literary. The first event of the day was the award ceremony where author, Jennifer Brown , received the first ever Louisiana Teen Reader’s Choice Award for her book, Hate List . She made a delightful presentation and kept the audience laughing. Though she explained her inspiration for Hate List and that was not a light moment. She explained how she was mercilessly bullied for four years beginning when she entered middle school. She began writing in 2000, but her first book, Hate List , was not published until 2009. The therapist in t
2 comments
Read more 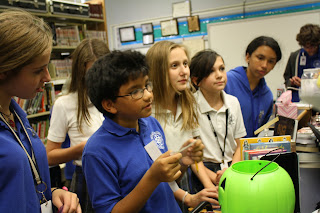 The library was a hub of activity all week long as the students celebrated Teen Read Week. It may not have always been about books, but it certainly put the library in the minds of all the students and teachers at PFTSTA. You can check out all the pics and activities of the week  here on the PFTSTA Library website .  Teen Read Week may be over, but there are two contests in which students can still participate. Entries in the annual bookmark contest are due October 29th. Open here for the entry form .  This will be the first time that PFTSTA participates in YALSA's Wrestlemania Reading Challenge. Teens will need to write a letter to their fav WWE Superstar asking the Superstar to try a great read recommended by the teen. The letters must be submitted by November 9th. You can find out more about this challenge by watching the video below: (watch at home, video hosted on youtube)
Post a Comment
Read more

Picture Yourself from another World for Teen Read Week 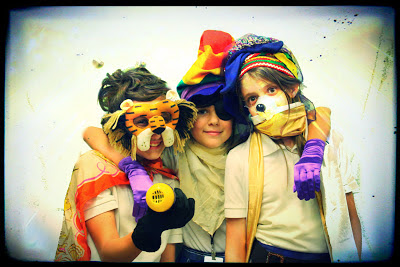 On Wednesday, for Teen Read Week, the students visited the library to dress like they were from another world. There was a table full of assorted costumes for them to select as an outfit. Wigs, masks, scarves and other stuff were thrown everywhere as students crowded around to create their own masterpiece. Maybe no one looked like they stepped out of a book, but we did get some crazy photos. Check out more pics of the day on the library website here . (Scroll to the bottom of the page to see the pictures.) I did some editing using pixlr.com to create these images
Post a Comment
Read more

It is that time again when members of Bookmarked have their book reviews published in the online newsletter SLJ Teen. In this edition, a PFTSTA student reviews a book by an author who visited the school, Gina Damico. We included a photo of him with the author to go along with his review of Scorch . He is a big fan of Damico and was thrilled to have the opportunity to meet her in person.   Open here to read the newest reviews . You can find a catalog of all the reviews here . Or maybe you want SLJ Teen in your in box every other week for free, then you can subscribe here .
Post a Comment
Read more

The theme for this year's Teen Read Week is, It Came from the Library. At PFTSTA, we interpreted that to be stories rooted in other worlds. When we decided to start the week off with a movie, I thought that we might want to use a Twilight Zone episode. Each episode lasts about 30 minutes which is perfect for each lunch period. Also, the setting for many of the episodes was a world that is not ours. One of the members of Bookmarked suggested  The Obsolete Man  because it was her favorite. It was first shown on June 2, 1961, and it still seems relevant today. I loved the fact that Burgess Meredith, who is deemed obsolete, is a librarian. How fitting. In this world there are no more books, so there don't need to be any librarians. I invited students to bring their lunches with them, and I served popcorn. There were two showings, one for middle school and the other for high school. Even some of the seniors joined us for the 1st showing
Post a Comment
Read more

October 15, 2012
The first day of Teen READ Week is always exciting because TRW has started and also because the top ten  teen-selected books are announced. This is one of the few book lists that is selected solely by kids. I made a sign that I am going to hang up in my library announcing the ten titles that won. Feel free to click the link below and download my sign from Scribd and hang in your library. 2012 Teens Top Ten Winners Sign
Post a Comment
Read more

Join the Conversation and Tweet TRW12 on October 17th

YALSA is encouraging librarians, teens and everyone who loves young adult literature to join the conversation about reading on Twitter on October 17th during Teen Read Week. Use the hashtag #TRW12 to join the fun. Click here to read more about it .
Post a Comment
Read more 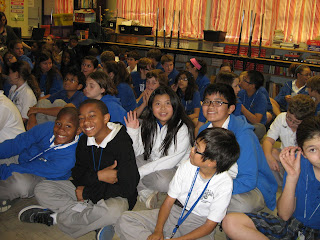 I know that JK Rowling was speaking to hundreds of thousands of kids across the world, but it felt like she was talking just to us. The 6th graders joined together in Mrs. Bordelon's room to watch this epic event at 11AM on October 11th. (I wonder if Ms. Rowling chose 10-11-12 for her webcast on purpose) Anyway, Ms. Rowling read from The Sorcerer's Stone.  It was truly magical. She talked about some of her favorite parts in the series. Those included introducing the reader to Luna Lovegood, the graveyard scene in The Goblet of Fire and writing Peeves' jingles.  She told us how there is a little bit if her in Harry, Ron and Hermione. Harry is quick to get upset and so is Ms. Rowling. Her humor is very similar to Ron's sense of what is fun. She is quite bookish just like Hermione, and said that as a teenager she would turn to books to find out answers.  You can enter the world of Harry Potter and find out how magical you are, get sorted into a hous
Post a Comment
Read more

Teen Read Week is Just Around the Corner

October 11, 2012
It is October and that means Teen Read Week is fast approaching. We always celebrate big in the PFTSTA Library. I use it to get kids into the library who don't usually visit unless required by a teacher. I like having my regulars too, of course. The members of the high school book group, Bookmarked, always help me plan and oversee the running of all the activities. It is the middle school kids who really get excited about the events.  This year, we sort of streamlined things. I think that I am prone to over plan, and if there are too many activities, the students don't really know which ones to choose. I think that  this year is going to be a great one! Check it out : Teen Read Week @ PFTSTA LIbrary October 15th—19th 1. Annual Library Book Mark Contest : There will be one winner from middle school and one winner from high school. The winners will each receive a $20 Barnes and Noble gift card, and their bookmark reproduced on cardstock to give away to the PFTSTA co
Post a Comment
Read more

BRiMS Meets to Talk about The Maze Runner

On Thursday, October 4th, the middle school book group sat down to talk about the first book in Dashner's trilogy, The Maze Runner . The students loved the fact that such a small group showed up for this event and asked if next time the number of students could be capped at eight. It won't. We had one small issue with our discussion this month. One of the students had loved the first one so much that they plowed through the whole set before we sat down for our discussion. We kept having to ask them to quiet down every time they tried to speak with the rest of the group saying loudly, " STOP is it a SPOILER???? " The next book we will read is a single, so we won't be facing that issue again.  The book proved to be popular even among the students who are not fans of science fiction. Though one student said that she did not like any of the characters in the story. We tried to figure out what the Grievers really looked like by drawing our renditions of the
1 comment
Read more

On Wednesday, October 3rd, four members of Bookmarked had their reviews published in SLJ Teen. This is the seventh edition of the online newsletter that has carried book reviews by the high school students. They continue to submit some stellar writing and show the world that the students at PFTSTA are on the ball. Click here to read the entire October 3rd edition Click here to open the section of the newsletter with their reviews. Also, I am saving the URLs for all the reviews in one place. Open here , and you can read all the reviews that they have written since June of 2012. This link will be updated with each addition, so feel free to save it and go back every other week to read the newly posted reviews.
Post a Comment
Read more

Gina Damico Stops at PFTSTA on her Slapdash Book Tour

Having two author visits in a two week period may put me over the edge. However, I have no control over an author's travel schedule, and I don't want to say no to a great opportunity for my students. On October 1st as Gina Damico was making her way back home to Boston from the Austin Teen Book Festival, she stopped for a visit with the students at PFTSTA. She made a presentation to the 9th graders who were fascinated by the fact that grim reapers were the central characters in her books. The students at PFTSTA usually have very insightful questions for visitors, but in this case they seemed to focus on the minutiae of the book. They asked about how the reapers traveled, did they really kill their subjects (actually no to this), how were the new reapers selected, who were the reapers that weren't following the rules. All of these questions could be answered by reading, Croak , the first book in the trilogy. I was hoping for more why questions or questions about Gina'
Post a Comment
Read more
More posts