BRiMS Meets to Talk about The Maze Runner

On Thursday, October 4th, the middle school book group sat down to talk about the first book in Dashner's trilogy, The Maze Runner. The students loved the fact that such a small group showed up for this event and asked if next time the number of students could be capped at eight. It won't. We had one small issue with our discussion this month. One of the students had loved the first one so much that they plowed through the whole set before we sat down for our discussion. We kept having to ask them to quiet down every time they tried to speak with the rest of the group saying loudly, " STOP is it a SPOILER???? " The next book we will read is a single, so we won't be facing that issue again. 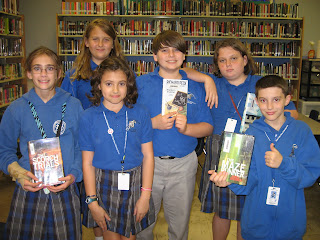 The book proved to be popular even among the students who are not fans of science fiction. Though one student said that she did not like any of the characters in the story. We tried to figure out what the Grievers really looked like by drawing our renditions of the creatures. None of them are fit to print, and I really don't think that we could do them justice. By the end of the discussion, we were not sure if WICKED had good intentions are not by putting the boys in the maze, but we were told that the third book does explain all.Most of the students want to finish the trilogy which tells me that the choice of title was a success.
book discussion book group BRiMS James Dashner The Maze Runner