The theme for this year's Teen Read Week is, It Came from the Library. At PFTSTA, we interpreted that to be stories rooted in other worlds. 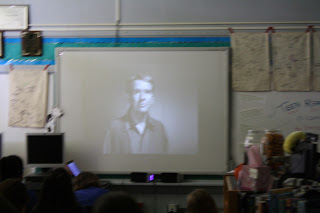 When we decided to start the week off with a movie, I thought that we might want to use a Twilight Zone episode. Each episode lasts about 30 minutes which is perfect for each lunch period. Also, the setting for many of the episodes was a world that is not ours. One of the members of Bookmarked suggested The Obsolete Man because it was her favorite. It was first shown on June 2, 1961, and it still seems relevant today. I loved the fact that Burgess Meredith, who is deemed obsolete, is a librarian. How fitting. In this world there are no more books, so there don't need to be any librarians. I invited students to bring their lunches with them, and I served popcorn. There were two showings, one for middle school and the other for high school.