Haddix and McMann Energized the 6th and 7th Grade Students


On September 3rd which was the Tuesday that we returned from the Labor Day holiday, we had the first author event ever in the new library. For this event, we were lucky to score two authors, Margaret Peterson Haddix and Lisa McMann. They are touring together because the newest books in their series came out the same day, Risked and Island of Fire respectively. It happened that their visit to our school was their first stop on this tour. The two authors have toured together before, so they were very comfortable with speaking together. I think that we hit the jackpot. The kids were thrilled with them and have been clamoring to check out their books ever since they left us. 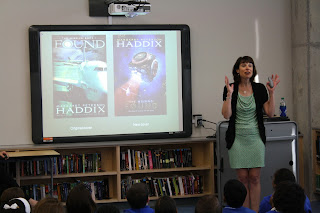 Margaret began with a book trailer. Then she explained how her book Among the Hidden was not suppose to be a series, but readers kept asking her what happened to Luke that she decided to continue the story with six more books which became the Shadow Children series. She got the initial idea for this series when she and her husband were deciding to have a third child, which she didn't, but this discussion of the third child was the premise of the series. When she finished this series, readers kept asking her what her next book was going to be. She was stumped and when her family went on a two week vacation, she fell asleep in the airplane. She woke up confused not remembering where she was. This got her to thinking about some children not knowing where they were, and so her Missing series began. The sixth graders have been reading Among the Hidden in English over the last several years, so we had a lot of Haddix fans in the audience. 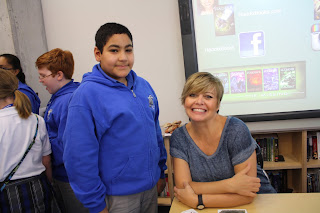 McMann also had a book trailer to share. I thought it was interesting that she too got inspiration from her children for her books. Her two children were very involved in the arts in their school in Arizona. One day they came home with a letter explaining how the arts programs were going to be eliminated due to budget cuts. Her kids were extremely disappointed. This gave her the idea for a world where the kids who are creative and artistic are unwanted and are put to death. Her series which is also the name of the first book, The Unwanteds, tells of a group of artistic kids who were saved but must live in hiding because they were deemed unwanted. When she began this series, she didn't know how to write about magic. Her own children helped her design the rules for the magic in the books including the paintbrush that could be used to turn yourself invisible or the paperclips that could be used as weapons.

Both authors encouraged the students to write their own stories and take the time to express their creativity through writing. We want to thank, Judith and Tom at Octavia Books  as well as Simon and Schuster Publishers for helping to bring these authors to our school. You can find lots more pictures of this event on the PFTSTA library website here.
author visit authors Lisa McMann Margaret Peterson Haddix Octavia Books The Missing series The Unwanteds series