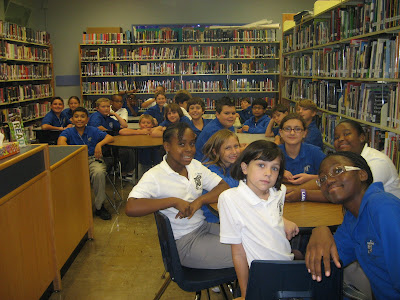 Here are some of our new students. I broke a record I think. On the fourth day of school they were in the library for orientation. After orientation, the doors to the library are open for the school year.

It was a stampede. The kids were begging me to open. I could not say no.

Food in the library. That is an issue that remains a problem. I really don't want the food, but on the other hand I know that they students want somewhere other than the cafeteria to eat. I make sure that they throw away all trash, but they still manage to drop bits and pieces on the tables and the floor.
students teaching