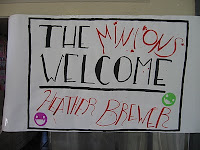 The 8th and 9th graders were blown away when Heather Brewer began talking at 9:30AM, Wednesday the 28th. She called all the teens in the room her minions. She believes in "world domination." With world domination, she and her minions could change the world to be a more accepting place. A place where there would be no bullies and everyone is accepted for who they are whatever that may be. Heather Brewer knows bullies, as she was not treated well by her peers in school.

One of the students said it was the best author visit ever, and two teachers said the talk was awesome because Heather was so real. She spoke with honesty from the heart, and the students could relate. There were many hugs when she arrived and even during her talk. One student couldn't contain herself when she found out that Green Day was one of Auntie Heather's fav bands. She ran up for some love, and Heather was extremely accommodating. 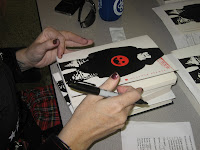 The main character in the Vladimir Tod Chronicles is a vampire. No, she did not begin writing this series to ride the tide of the Twilight phenomenon. She has been a big fan of horror ever since her teen years when she did a lot of reading in the genre. She loved Bram Stoker's Dracula. When one of the students asked if Heather liked Twilight, Auntie Heather had a lot to say. She thinks that the values for girls portrayed in the series is not what she would want for her daughter. It is not okay for some guy to stalk you or hang out in your bedroom and watch you sleep. No girl needs an Edward to protect her because with "girl power" any girl can do whatever they set their mind to do. 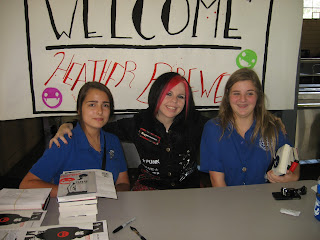 After the presentation, she sat down for a book signing. A handful of students would not leave the cafeteria. They hung out and chatted for as long as I would let them. They were thrilled to be basking in Auntie Heather's energy. I couldn't believe it. We had a record five authors visit us at PFTSTA last year. I saw nothing like the love that  the students gave to Heather yesterday. Heather, you really do rock. 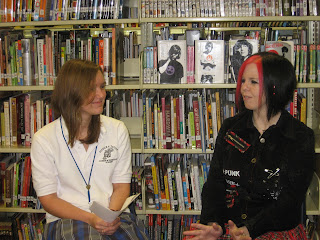 The visit ended with a taped interview. The president of Bookmarked, the high school book group, sat down with Heather to film some Q and A. I am going to use it in my next episode of Get Reading, digital book talks for teens who love to read. Be on the look out soon for a link to this episode. If you are a Heather Brewer fan, you will want to see it.

(By the way, the cool dress that she is wearing comes from Japan.)
Thanks Penguin Teen and Octavia Books for this amazing event!
author books Heather Brewer literature photos students YA Lit YAlit Young Adult Young Adult Literature