October 09, 2011
On Friday, October 7th, the 6th and 7th graders were invited to bring their lunch to room 204 and meet Nat and Alex Wolff via Skype. The boys  were on an anti-bullying campaign and Skyped with classrooms around the country to talk about it. Even though they are famous and had a show on Nick, they had trouble from kids at their old school. They believe kids need to ignore the bullies and be themselves. 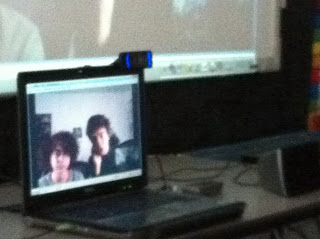 Music is a big of their lives. They write songs and perform. They have a new album coming out next week called, Black Sheep. They shared a song from that album and had the kids dancing and singing along. They also talked about some of their other passions like soccer and writing.

Watch the video and enjoy the Naked Brothers visit to PFTSTA: