On March 12th, the members of Bookmarked arrived early for their regularly scheduled weekly meeting. Instead of talking about what we were reading, we were going to skype with author, Cecil Castellucci. I had won a skype visit through a contest that I saw on Twitter.  A group of authors living in the Los Angeles area were offering their time for this contest, and the only stipulation to enter was that you could not be in the LA area. I found a number of Cecil's books in the PFTSA library's collection. I chose to read Queen of Cool in anticipation of the event. Okay, I am a girl, and I picked it because I liked the cover. Most of my students do that, too. It was a quick read, and the main character learns how to be a genuine person in the end which was very uplifting. 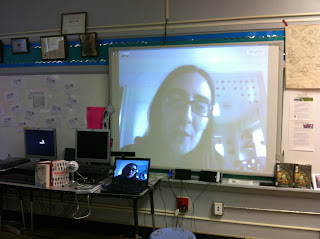 I don't know if Cecil knew that she was being projected larger than life in the library. She was delightful and so gracious to the students. She talked a little bit about her background. She grew up in New York city and has lived in the Los Angeles since college. She moved to LA because of her involvement in a band, but it seems that her muse has led her to writing as a full time career. 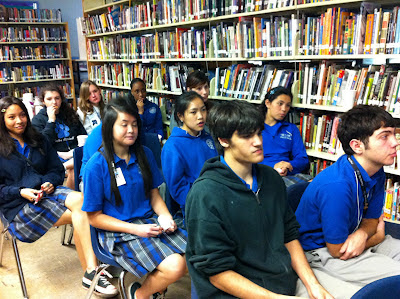 Not all of the students were familiar with her work, but they had some good questions. Though the students felt her books were more geared to girls, she described one of her newest, First Day on Earth, that should appeal to both boys and girls. The protagonist is a boy who thinks that he has been abducted by aliens. I am going to buy that one for our library. She also talked about how she has been writing for a long time, and yes she had some rejections before her first book got published. I liked hearing about all the different kinds of writing that she has done. She wrote a libretto that was performed in Canada, and she has a couple of graphic novels published and more coming down the pike.

Thank you Cecil, for giving us a fun afternoon. I think that you have inspired some budding writers.