Check Out Article from atyourlibrary.org

June 23, 2012
A couple of weeks ago I received  a call from Steve Zalusky at ALA. He writes for the online magazine, atyourlibrary. He was calling because he wanted to do an article about technology in school libraries. He had the press release about the award that I am going to receive from AASL. He also wanted some additional talking points from me. I was sitting at home on the computer when he called. I was sort of taken aback, so when I talked, I thought that I might have sounded a little lame. When I write, I get a chance to edit and edit and edit some more so I don't sound like a blathering fool. Lucky for me, I blathered in the right direction. I sounded half way intelligent. As always, I am very passionate about my school library.
Open here to read the article. 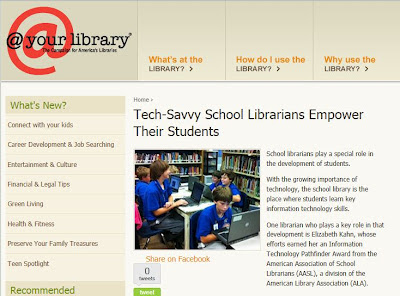