December 30, 2012
This all began a couple of weeks before the holidays, but I have not had time to get it written down. It is such a wonderful example of 21st century learning that I wanted to share. A number of teachers have talked about asking students to create infographics to illustrate data. I was even helping 6th grade math students find websites to help them create graphs for an infographic project. The teacher just hadn't decided yet what the theme of the infographic would be, so curating sites on Sqworl was as far as they had gotten.


In the meantime, a class of juniors and seniors taking AP Environmental Science were using the start-up Infogr.am to create infographics illustrating various environmental land-use issues such as flooding, national parks, etc which they had previously researched. I heard that the students were not happy with the online software, so I visited the class to tweet out the students’ issues to the makers of Infogram. I was surprised at the speed within which I got a response; it was within the hour. There were many tweets that went back and forth between us as I explained the issues that the students were having. However, in the end, the science teacher and students decided next time they would try a different program. Below is a picture showing the beginning of the storify that I created to document this discusssion, you can open to read the whole Twitter conversation.
The next week, a sixth grade class was learning how to create infographics. The students were using survey information from all the sixth graders for their infographic, like which is your favorite ice cream flavor. The teacher asked them to use Infogr.am or Easel.ly. Most of the students chose Infogr.am and loved it. Since the previous interaction with Infogr.am had been negative, I decided to tweet out the positive comments of the younger students to the makers of the software. I began by posting a picture of the students in action using the software. You can see it below. 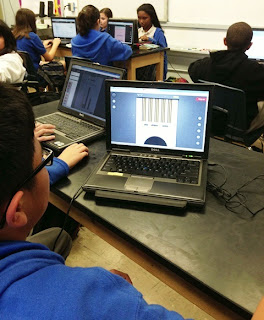 Infogram was so pleased to hear from us that they shared the pic around the office. The company's home is in Latvia, so I think that they are 8 hours ahead of us. Anyway, this time the Twitter conversation was very positive because the sixth graders really liked the software. The simplicity of it made it easy for them to use. From this interaction on Twitter, the teacher, librarian and founder of Infogr.am decided to schedule a skype session so the students could explain what they liked and what they thought needed improvement in the program. Before the skype began, the 6th grade teacher created a Google doc so the students and all the teachers could collaborate across the grade levels and share their thoughts with Inofgram. The librarian shared this doc with the founder of Infogr.am, Uldis. The teachers invited several older students from the environmental science class to join this skype session so they could express their concerns. It took a lot of communication between the teachers and librarian for this scenario to happen at all.

Here are some pics of the skype session that was held in Mrs. Maher's room on December 4th: 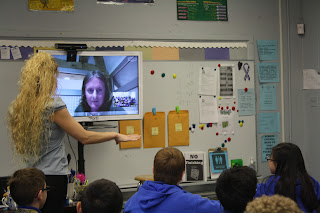 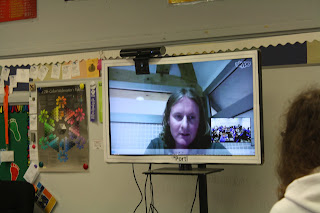 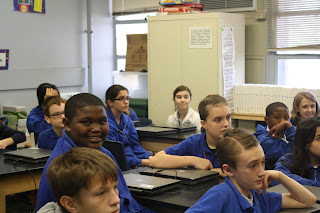 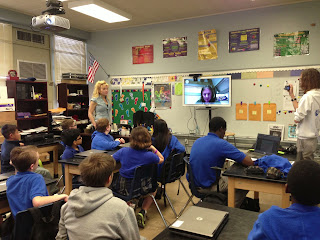 We learned from talking to Uldis that Infogram was conceived during the summer of 2011 and launched in February 2012. It is really young! Infogram  was created for journalists to use, so the program needed to be simple with a fast learning curve so infographics could be made quickly in the field. There are three people on the team in Latvia including Uldis. He is a graphic designer by profession and there is another designer and a programmer on staff. He said that he knew that templates were necessary for the software to work. So the designers could make it look pretty, and the programmer could make it work. It is now being used in education and science and the news industry. One of the senior boys involved said when the skype session was over that, “this has been the coolest day at Taylor.

Oral and Written Communication: Between teachers, librarian, students in multiple grade levels and the founder of Infogr.am.
Collaboration: Between teachers and librarian
Critical Thinking: Students had to assess what worked and didn't work with Infogr.am
Creativity: All the students created an infographic
Technology: Infogr.am, Skype, Google Docs, Excel, Twitter, Survey Monkey (data for 6th graders)
Real World Relevance: Students collaborated and communicated with the founder of an online software program to give him feedback on his product

I put together a video (filmed by a student) of bits and pieces from this skype session. We talked with Uldis for about 30 minutes, but the video is 10 minutes. You can view it below.

Skype Session with Founder of Infogr.am 12.4.12 from Elizabeth Kahn on Vimeo.