Member of Bookmarked Joins Me at ALA

July 11, 2013
Every year during both the Mid-Winter and Annual conferences for ALA, YALSA (Young Adult Library Services Association) invites local teens to visit the conference one day to speak at the Best Fiction for Young Adult Committee meeting. It is a great day where the kids get to give their opinions on what they have read to the committee members, get fed by Penguin Publishers and meet many of the authors of the books that they have read and loved. I took a group of ten kids when ALA was in New Orleans in 2011. One of the members of Bookmarked, pictured above, spends his summers in Chicago with relatives. He didn't get to attend ALA in New Orleans, so I invited him to spend Saturday, June 29th with me.

We started the morning at an interview of author/illustrator Gene Yang by his friend and collaborator Thien Pham. I knew that Thomas was a manga fan, so I thought that he would be interested to hear them. Thien and Gene have been friends a long time and even taught at the same school. Gene has two books coming out in the fall that are companion books and tell the story of the Boxer Rebellion in China from two different points of view. We later visited their table in the artist alley, and I got a nice picture of Thomas with the authors.

One of the authors that I really wanted to meet at ALA was Stephanie Kuehn who wrote Charm and Strange. One of the members of Bookmarked wrote a review of her book for SLJTeen here. This was a book that Abrania raved and raved about. She is a very discerning reader, so when she gushes over a book, I listen. I wanted to meet Stephanie and get a book autographed to bring back to Abrania. It is a long story, but by the time that I met Stephanie, there weren't any books left. Hopefully, the post office fairies will have a signed copy in my inbox when I return to school. 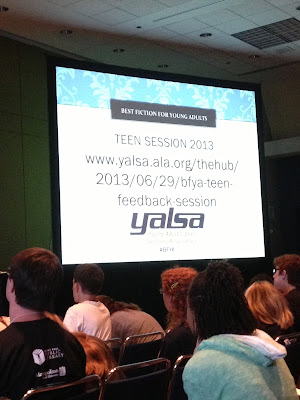 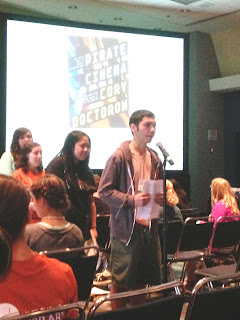 Finally, it was time for us to head upstairs to the Best Fiction for Young Adults Committee meeting. There were 50 teens there to talk about all the nominated books on the BFYA list. The committee members read all year long, and the list is finalized and publicized after Mid-Winter in January of every year. The members likes to hear what the teens have to say because the books are suppose to be the best of the best, but they are also suppose to appeal to teens not just the librarians on the committee. Thomas got up to talk about Cory Doctorow's Pirate Cinema. He was a fan and thought that it should be included on the list.

Penguin Young Readers provided a pizza lunch to all the teens and their chaperones. Then several authors spoke to the kids about their books and the writing process. The students got to ask a lot of questions and participate in a book signing event when it was all over. Thomas was a super fan of the Pendragon series when he was in middle school, so it was a real treat for him to have a chance to talk to the author, D J Machale.

It was a busy day for both of us. I am glad to have had a chance to share ALA with one of the students at PFTSTA. Even though I love having a chance to schmooze with my fav authors, it gives me even a greater thrill to introduce my students face to face to their fav authors.


ALA ALA annual authors BFYA YA Lit YALSA