I Feel Like I am Late to the Party


I consider myself on top of things when it comes to technology and education.Though there are many tools and tricks that I choose not to use, I try to be aware of what is new and hold it on the back burner to share with teachers in my building or eventually use it myself. Like Kahoot, I had heard about it and knew teachers that used it, but I thought that I didn't need it. Then we got a set of iPads that I could use with students in the library, and I thought that I would ditch the Activotes that came with the Promothean Board and try Kahoot. I am so glad I did because it has become a new favorite tool. I love the way that it ranks the students' answers on speed and accuracy and that the leaderboard can change from question to question so that the competition aspect of Kahoot completely engages even the most reluctant of students. 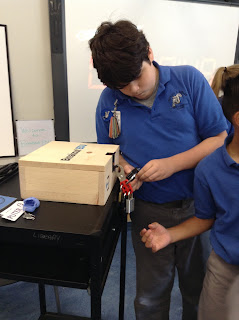 Then there is BreakoutEDU. I first heard the word many months ago, but I had no clue what it was and didn't know if it was something that could be useful in the library. My finger must have dropped from the pulse of edtech because I truly did not understand that it could be used to teach the 21st century skills of critical thinking, problem solving, collaboration, communication, and work ethic. On top of that, you can use it for any content area and students of all ages from elementary through high school. That makes it a very cool tool. During the Louisiana Library Association conference in March, I attended a session that was presented by one of my favorite people, Susan Gauthier, the library director of East Baton Rouge Parish schools. It was a session on BreakoutEDU. I still didn't know what I was getting into, but if Susan was sharing it, then I knew that I needed to learn its capabilities. She designed the Breakout to demonstrate how to use the high schools' online resources available in her district. This was the perfect scenario to share with other librarians.

During her session, I saw how everyone in the room was engaged. I also saw how teamwork was needed if the box was going to be unlocked. When I returned to school after the conference, I immediately researched how to obtain my own box. Unfortunately, spring break happened, and the PO that we sent in to purchase the box just sat for a few weeks. Finally, my box arrived just as I began the two weeks of administering AP exams. this meant that I had little time to plan a Breakout. Last week, during the final full week of school, I was able to schedule with a 6th grade math teacher my first BreakoutEDU game. I chose The Lake House because inequalities was the theme of the game and was taught to the 6th graders. It was a blast, but I learned some things to make my next sessions run more smoothly.

I played the game with two classes of about 30 students each. I used all the clues that were provided online, but I did add another lock box. There were four locks on the box, two locked boxes, three math problems on paper, one problem on line, and the clue for the extra box. I also threw in a red herring which I told the students could happen. I did think that it is possible to have the whole class working on the clues for one box. I would say at any given time 80 to 90 percent of the students were engaged, but there was not enough for everyone to do for the full 45 minutes. I plan to order another box, so that I can run two games at one time with 15 to 17 students each working on the game. That way it can be a competition of which team can unlock the box first. Also, I learned very quickly to remove the clues that had already been used. Students would just leave the clues on the tables and walk away whether they had solved them or not. This made it confusing for the others who would come behind them to know if the clue had been solved. I just gathered the items and put them in a bin. This worked well if I had another group coming to play a game because everything would be in one place ready to be used again. I also laminated all the paper clues so that the students could use dry erase markers to solve the problems. I even made sheets of scratch paper and put out pencils. Also, if I am going to do a math related game, I better make sure that the math equations are solvable. The teacher who created Lake House used 6 inequality problems for the directional lock. The answers offered four directions, but my students only had experience solving problems on the x axis. They did not understand how to plot their answers on the y axis. Both groups needed lots of guidance with these problems. The teacher of the class left the planning to me, but I should have checked with her first whether the students could actually solve the problems accurately. Students have to be discouraged from just trying to open the locks by guessing or looking for a pick. Also, students need to be encouraged not to give up. They would start the process of computing the answers and would quit without finishing. Needless to say, neither group made it out of the box in 45 minutes, and we did not have any time for debriefing. That is something that I would change immediately, and I believe is a very important part of the game.

School ends on May 25th, but my next Breakout is going to be for the day that I am subbing in our school''s Tinker Lab Camp. I thought that it would be a fun and different activity from the 3D printing, vinyl cutting and laser cutting that they are going to do during the rest of the week at camp. I look forward to trying it again with a game that has clues that I know will work.