Lucky me! Moderating a Panel of YA Authors 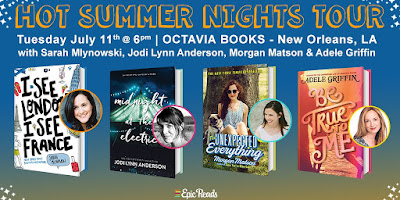 While on vacation in early June, I got an email from Octavia Books, a local independent bookstore in New Orleans, asking me if I would be interested in moderating a panel of YA authors. As soon as I heard who they were, I sent back a resounding yes. I had read books by all four authors and was certainly anxious to meet them. The panel was set for July 11th which meant that I had about a month to read the four books that they would be touting at the event.

Being prepared is really important to me. The publishers sent me three of the books in a timely fashion, and by the time I got home from my trip, there were two books waiting for me. I got to reading.


I began with Sarah Mlynowski's book, I See London I See France. She writes middle grade too, but this is the first YA book that she has done in awhile. It is the story of two nineteen year old girls, and their adventures as they backpack across Europe during the summer between their first and second year of college. It is a funny, true to life tale about friendship with all of its highs and most importantly lows.

Then I read Adele Griffin's Be True to Me. While reading it, I knew it was set some time in the 70's, but not the exact year. When I contacted Adele about the year, she let me know that it was the Bicentennial year of 1976. In 1976 I was the exact age of one of the main characters. That made reading the book more fun for me with all the music, clothing, and political references of the time. It is summer on Fire Island in the small community of Sunken Haven. The story is told from the points of view of two 17 year old girls Jean and Fritz. The competition that has been building for years between the girls really heats up with the arrival of a new boy that summer who both want as their boyfriend. He chooses only one of them. The ending came as quite a shock to me.

Midnight at the Electric by Jodi Lynn Anderson was a mash up of sci fi and historical fiction. That was a nice surprise and maybe a way to get teens to read historical fiction (most of my students shy away from it). There are three stories set during the years 2065 to 1037 to 1920. They are connected, but you have to make it to the end to find out exactly how. This was a quick read but so rewarding.

Those were the books that the publishers sent me. I kept waiting for Morgan Matson's book to arrive, but it never came. I knew that I had to read it before the event. It took me a day or two to realize that I should check the public library. How silly of me, a librarian who didn't think to check the library for a copy. The Unexpected Everything was published in 2016, so it was available in several local branches of my library. When I got it, I balked because it was 517 pages long. I had less than a week to read it. It was an engrossing story, and I was able to finish it the night before the event. Andie has her summer mapped out as she plans to attend a prestigious program at a college out of town. That is until her congressman father lands in a scandal that directly impacts her plans. She recovers quickly by finding a job at home as a dog walker, meeting a new guy, and getting to spend quality time with her three best friends. Will this idyllic summer last? You know that it never does.

At 6PM on July 11th, the four authors and I sat down to chat. When planning out my strategy, I took the advice of a former student who did a similar gig in 2014 and created a series of questions that were general enough rather than specific to a book so that all four authors could address every question. I began by asking them to describe their book in 45 seconds or less. Then we talked about romance because each of the books had an element of romance. I have high school students who want as little romance as possible in their favorite genres of sci fi or fantasy. Sarah said that her publishers are always asking for more. It seems in the publishers' eyes that teens want to read about romance. 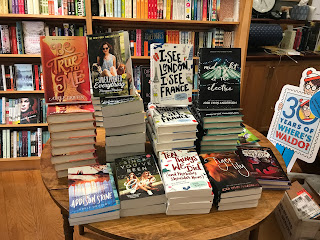 Time is an essential part of these books, and I asked the authors to address how it affected their writing. Morgan said that she liked using the time period of the summer because it gives her a beginning and ending story arc that works nicely for her. Sarah explained that she had never done a summer story before but loved writing this one. In Adele's book, the 1970's are an essential part of the story. Teens had no easy communication with each other, no social media, and they really didn't own a lot of stuff. One of the characters went off to Europe for the whole summer with one small suitcase.

In preparing for the books, Sarah pulled out her pictures that she took when she backpacked through Europe with her friends. She was even able to travel to the some of the cities where her characters visit. She did not have the time to travel to every city because she has young kids at home. She explained that European travel has changed a lot since she was a young adult. Now you can make plans, look at maps, and keep in touch with one device that fits into your pocket. Adele used Pinterest to get the feel of the time period for her book. She even created images to use in the book, but those did not make it to the final copy that was published. 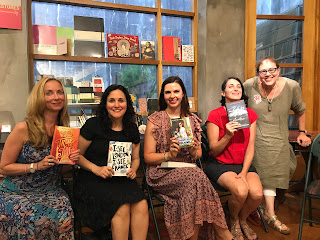 Reading and books figure prominently in all four of these novels. I asked the authors if they thought that they needed to promote reading. Jodi said that as a writer, reading has always been important to her and so she incorporated that into her story because of her love of reading. In her book, it is the letters written by her protagonists that move the story along. Sarah had books for her characters to read while traveling, and they read books set in the cities in which they visited. In Morgan's book, one of the main characters is a fantasy writer, so she wrote a book within a book so that the reader got a taste of his writing. 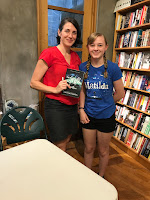 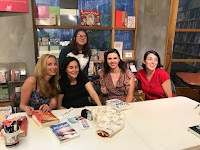 It was a fun event. Two of my students from PFTSTA were there and so were two of my librarian friends. I would do it again in a heartbeat as long as I had the time to get the books read in time. It was a Hot Summer Night in New Orleans---and I got to spend it with some authors who rock!