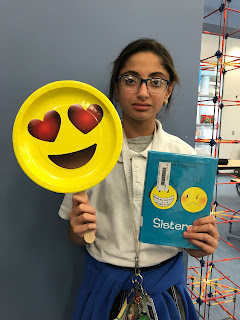 Teen Read Week (TRW) happens during lunch in the school library. Since there are three lunch periods, we celebrated from 11AM to 1:10PM every day. In years previous, we had two lunches, and  it was so much easier to schedule students to help run the activities, but now it is just more difficult to manage multiple activities on one day like we did in the past. Also, with the number of students growing to 700 this year, it means that I have to simplify the plan for TRW to make it work and keep my sanity. 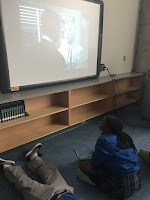 The theme of TRW this year was "Unleash your Story." We put the focus on character through all our activities. We started the week with a showing of a Twilight Zone episode. This year we showed "100 Yards to the Rim." This episode is all about the main character who travels in time from 1847 to 1961. All he wants is to find a new home out west for his family. His travel through time allows him to do just that. It was a hit. We also showed an animated German short called Cats & Dogs. If you find it, it is a delightfully simple animation that takes place entirely within the pages of a book. 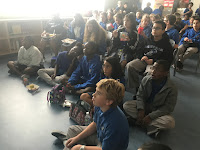 For two days, we played a guessing game that we called, Who am I? We always play some sort of version of this game. All I had to do with the questions was use the ones from last year and switch them around so that every answer was a character's name either from a book, movie, or television show. I also tapped the members of the high school book groups to help create some new questions for the game. Students love to help run the game, and we set it up at the table situated right where you enter the library. This means that almost every person who enters stopped to play the game. 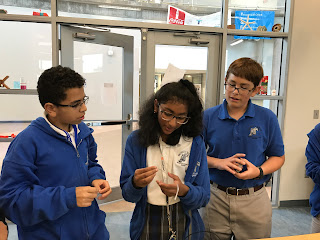 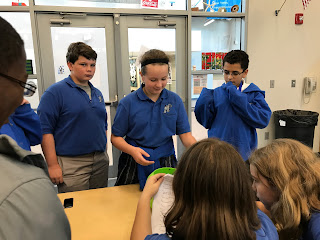 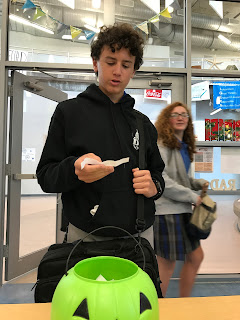 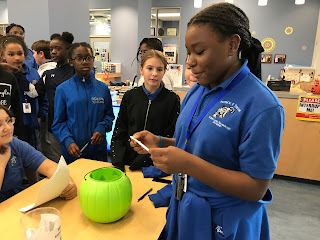 For our craft activity, I chose something that needed few supplies--a mini origami book. It was super easy to set up. I had instructions displayed on the interactive white board, but I also put iPads out at each table so the students could see the instructions up close. In this activity the paper has to be cut in half, and though I have plenty of scissors, I chose to cut all the paper ahead to save some time. Students visit during the 40 minute lunch, but some get here with only 15 or 20 minutes left in the period so speed is important. I loved watching the creativity that the students employed choosing certain colors, folding the paper in the opposite direction, or making patterns where none was necessary. Whatever they did, the books that they designed were amazing. 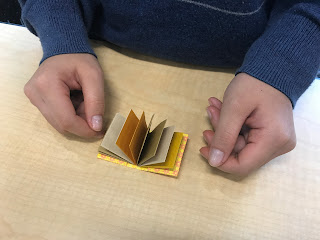 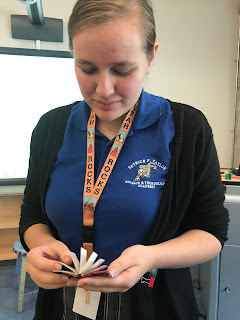 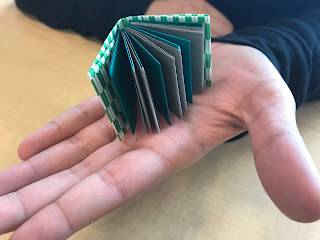 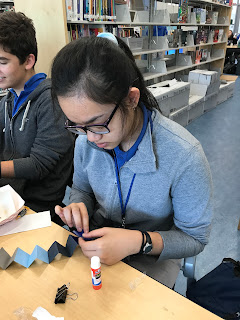 For the photo op activity, I thought of a way that students could weigh in their feelings about books that they have read. I found some emoji paper plates. I glued a stick on each plate. The kids selected a book from the shelves or the book covers of favorite series that I printed out ahead of time (so many popular books were checked out already); then they selected an emoji plate to match. They could show their face or cover it with the emoji. The photos were simply awesome, and so many kids participated at all of the grade levels. 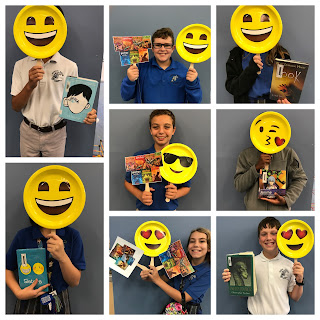 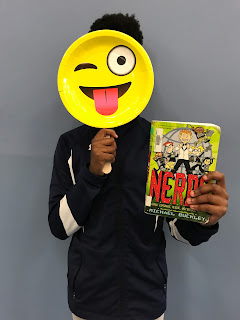 The book fair was scheduled the week before Teen Read Week. One thing that I did this year to lessen my stress was to order all of the supplies that I needed on Amazon two weeks ahead of time. Not only did this save me from having to physically shop, but I didn't have to schlep all the items from the car to the library. The boxes arrived in the school office, and someone would deliver them to the library. i don;t think that I spent any more than I usually do for this event. I had to buy candy for prizes, candy for the guess the number of lifesavers in the jar game, origami paper, glue sticks, emoji plates, and craft sticks for plates. I ended up having to make a Michael's run because I misplaced the solid sheets of origami paper that I had ordered. I now have a ton of origami paper, and I will probably add it to the library makerspace next week.

The only part of TRW that is not completed is the book mark contest. The forms are not due until the 24th. I will make a blog post with the winners later in the month. If you want to see more pictures of the week check out the library website.
Teen Read Week TRW TRW17 YALSA