Chelsea Sedoti Talks about her Books 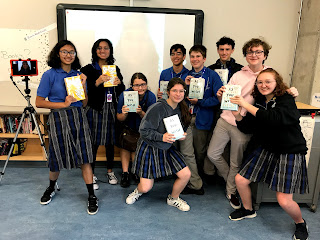 Bookmarked Junior Edition or BJE is a later edition to the stable of book groups at Patrick Taylor. This group needed to be created once the school grew to include three lunch periods rather than two. Though the group meets weekly, there are usually only about four or five regulars. That is fine by me, but when I work hard to schedule a visit with an author, I want to see all the members attend. Yesterday, we had a nice turn out for author, Chelsea Sedoti. 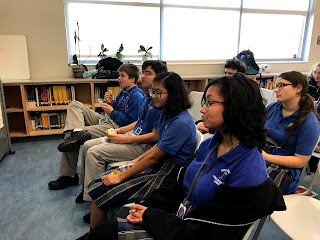 I scheduled this event through SourceBooks. This publisher has made it easy to schedule virtual author visits. Their one requirement is that we buy some of the author's books. That is not an issue because I want the students to have an opportunity to read a book by a visiting author whether the visit is virtual or face to face. For some reason this year, I had a hard time connecting with the sales department at SourceBooks. I planned this event back in September, and I wanted to order the books early. It wasn't until January that I connected with sales, and we did not receive the books until the week before the visit. I am all about getting things done way ahead; this did not sit well with me. Even so, myself and a few kids had time to read before the event, and others grabbed the book just as we finished talking with Chelsea. 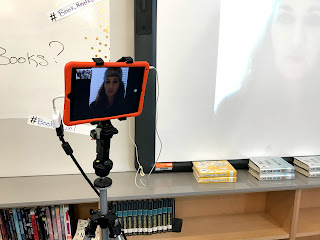 At every author visit this year, students have asked questions about where the author gets the names for their characters. Chelsea wanted the town in As You Wish to have an old-timey feel, so she researched common names from the Victorian era for her characters. The main character of the book is named Eldon. Except in fiction, none of us were familiar with anyone of that name. She also explained that she does not usually base her characters on people she knows, but she will pull bits of personality from those she knows for her characters. 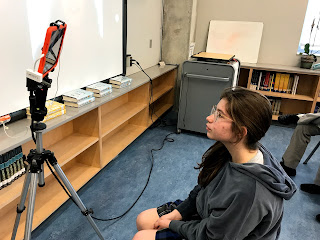 How a writer gets their start can often make for an interesting story. When Chelsea began her talk to the students about her fourth grade self, I realized she did have a good story to tell. Writing stories has been something she has loved for almost her whole life. Her year in fourth grade was spent writing stories because her teacher wanted to keep her engaged. When it was time to make a living, she had to find other avenues beyond writing to make ends meet. She was a videographer for awhile which did give her a chance to tell some sort of story. She also worked as a copy editor which gave her an opportunity to write though not in a very creative way. She now has two published books, a book due next year, and she is working on her fourth. Like many authors, it took her some time to get established, but she is finally able to live the dream that all began when she was in fourth grade.