Teen TECH Week 19 is Now Over

I know that Teen Tech Week (TTW) and Teen Read Week (TRW) may not be long for this world. Both of these initiatives have been sponsored by YALSA for years, and I can hardly remember a time when I did not celebrate them in my library. In the future, it seems that YALSA wants to promote more activities for teens year round rather than just for two weeks every year. In my library, I serve tweens and teens all school year long. I like the idea of having a special week in the fall and one in the spring to highlight what the library has to offer. Even if these weeks are no longer sanctioned by YALSA, I expect to plan and execute a week's worth of fun twice a year anyway. Certainly, I can do that, but without other libraries doing the same across the US, sharing on social media does not have as big an impact when I am the only one sharing. 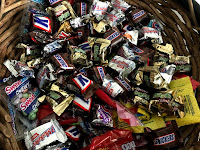 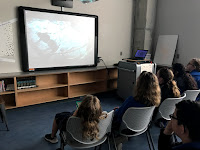 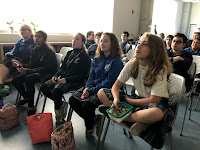 TTW had a national roll out on March 9th, but that week I was out of the building for a state conference. I needed a week to prep for all my activities which is why TTW was this past week. We always start the week with animated shorts and try to show the ones that are nominated for an Oscar. I had a link to all those nominated, but after the Academy Awards ceremony, free access to those shorts was eliminated. I did some searching and found seven videos that I thought the students might like with several of them centered around birds since that was our theme for this year. Since students visit for TTW during their lunch period, they do not arrive all at the same time. By showing so many short videos, everyone who visited the library that day had a chance to see some of what we viewed. 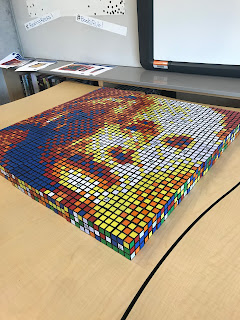 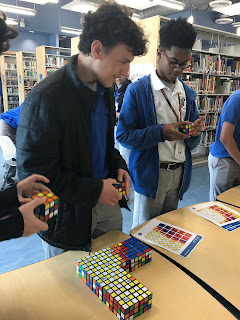 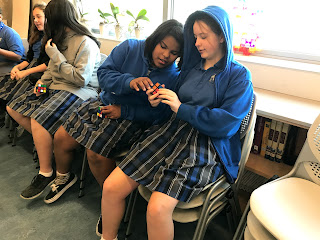 I like to use the same template every year for the planning of these special weeks. It just makes my life easier, and I can build on the successful activities that we have had the previous years. Last year, we borrowed Rubik's Cubes from You Can Co the Cube. We get to keep the cubes for several weeks, so we roll them out with TTW. Then, they remain out for a few weeks so that we can do many mosaics over the time that we have them. This time I borrowed 225 cubes. So far we have used all the cubes for Albert Einstein. It took them a few days. Currently, they are working on Abraham Lincoln. I have not made my own mosaic yet with Twist the Web, but I intend to. The downside of creating my own is the large quantity of paper that it takes to print out the pattern. 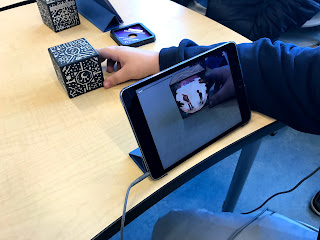 I attended my state conference on the 14th and 15th of March and received a Merge Cube as a prize at one of the sessions that I attended. That gave me the idea to do augmented reality for one of the days of TTW. I purchased five more cubes cheap on eBay. I also printed out some of the free sheets from Quiver Vision to use too. A handful of students owned their own cube but most had never seen one before. I downloaded five different apps to use with the Merge all for free except one. Once TTW was over, the Cubes were added to our makerspace to be used any time. 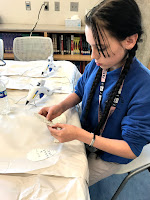 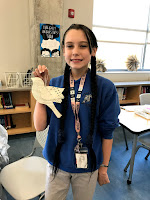 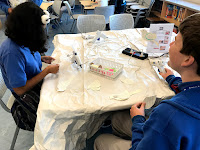 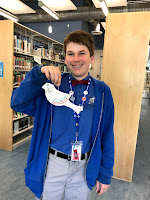 There is always a craft for TTW, and actually it was the craft that help me come up with our theme for this year. I wanted to make something out of old library books. I found the directions for this bird in a blog post. I made one for myself to see how it easy it would be, and it was fast and easy. That is always a plus because these activities are all done during lunch. Sometimes students will only have 15 minutes to complete whatever we are doing from start to finish. I adapted the instructions in the blog to this. This was a craft enjoyed by all ages, and everyone made their own spin to what was given. Some older students ditched the template and made their birds smaller. One of the middle school students wanted their bird to be more three dimensional so they added wings to the back side, and then everyone added more wings,even me. There were a few who did not like the fact that I had cut up a book, but I was planning to discard the book anyway. It was free paper. Actually, this craft cost nothing because I had the paper for the bird, string to hang it, glue for the five glue guns, glitter glue which was purchased for a different project but never used, cardboard for the templates, and pencils and scissors. When I can design a craft project this popular without costing a dime, that is a real win. 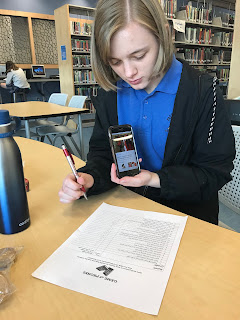 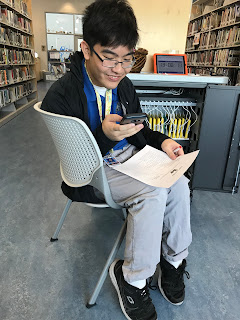 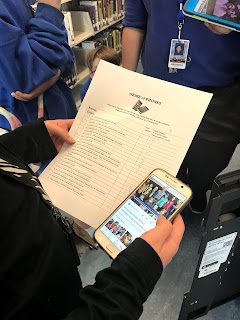 We ended the week with an Internet scavenger hunt that I called Game of Phones. Though most of the students used the library iPads rather then their own phone. The students were given a list of pictures to find on the Internet. If they could find 15 pictures on the list in 15 minutes they won a prize. The middle school really got excited by this one but not so the older students. If I was going to do a scavenger hunt again, I would need to come up with something a bit more interesting.

I had an online quiz that students could play once during the week. I created the quiz in a Google form and designed it to determine the correct answers which saved me a lot of time. The students were shown the cover a book, and had to give the call number as the answer. I gave them the link to the library OPAC to find the call numbers. I wanted the students to practice using the catalog and finding exact call numbers. If they could answer 25 correctly, then they could select their own prize from the basket. If they finished with 15 answers correct, they received a miniature Rubik's Cube. Most kids tried for the 25 and made it, but a total of only 21 students completed the quiz. That was disappointing considering that the quiz was so easy. 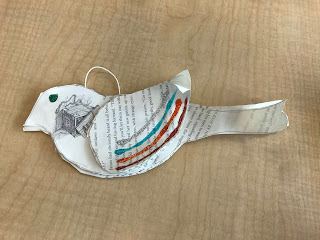 I really like the idea of a week of special activities in the library. It highlights what choices the students have when they visit the library. It gets students to walk in voluntarily who don't usually choose to do so. For the regulars, it gives them a chance to find out something new about the library that they didn't know before. Visit the library website for more pictures of the week.
technology Teen Tech Week TTW TTW19 YALSA