A couple of months ago I got an email asking if I would moderate a panel with the author of Parachutes, Kelly Yang. I had not read Parachutes yet, but I was game. The person scheduling the moderators said she found me through this blog and thought that I could do a good job with a young adult author. Since the book festival was going all virtual, they could invite authors and moderators from all the over the world to participate. My husband was disappointed that there was no road trip, but I liked the idea that I could participate on a Sunday afternoon in the comfort of my own home. 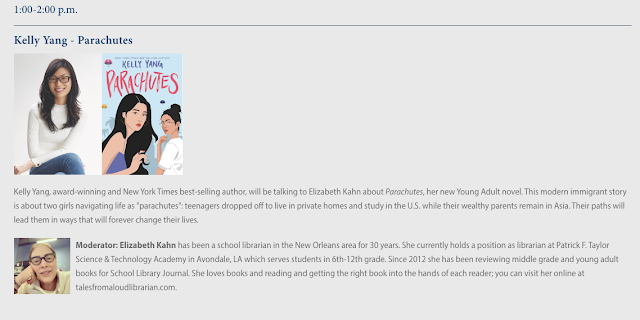 My first order of business was to read Parachutes. I chose to listen to it. Since it was written from the point of view of two teenage girls, I liked having the two voices of the narrators. This story focuses on Claire, a Chinese parachute, who travels to the US to attend high school while living in a host home far away from her family, and Dani, of Filipino descent, who comes from a very different socio-economic background than Claire. The two may have a lot in common but don't want to acknowledge it. It is a story of sexual assault and sexual harassment in the setting of a very tony private school in southern California. 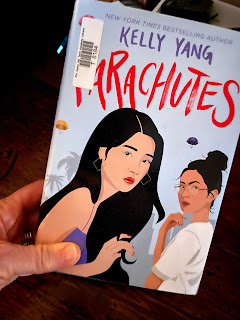 After reading the book, I did some research on Kelly. She was born in China and grew up in the US. After surviving a sexual assault herself while at Harvard Law School, she fled the east coast, moved to Hong Kong, and became a teacher and then a full time writer. She now lives in Los Angeles. Her first published book is Front Desk and the target audience is middle grade. I decided that I should read that book, too. I am glad that I did because I refer to it several times in our interview.

Once I read the two books, I started to plan out my questions. I came up with about fifteen questions specific to her books and then some more general ones.  I had several weeks to plan out what I wanted to say which allowed me to revisit my questions a lot. We were going to be talking for an hour, and I realize now that is a long time to fill. 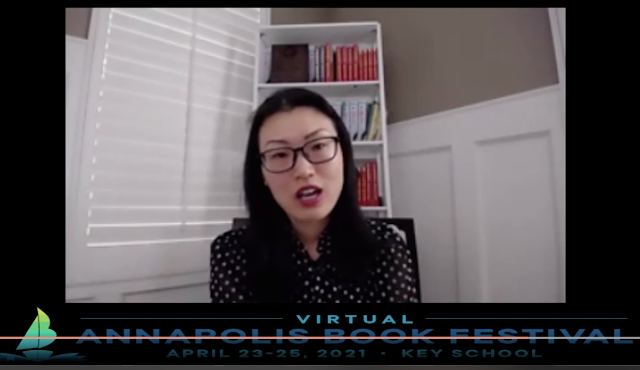 On the day of the event, I logged into Zoom. The two of us would be talking over Zoom with a producer there in the background if we had any tech difficulties. The audience was watching via Crowdcast. The producer fielded the questions from the attendees and sent them to me on the chat in Zoom. I found out after the event that we had just over 30 attend live, and they had positive feedback about our session.

If you missed it, you can listen now. All you need to register is an email address, location, and where you heard about the event. You will need to fast forward in about 8 minutes before my introduction of the author. The link should be live for about six months. If you are reading this after October 2021, the recording may no longer be available.