December 16, 2009
First we skyped in the library, then we used the brand new PolyCom system for a video conference and skyped all in the same session. Today four schools: Riverdale, Bonnabel, Grace King, and Patrick Taylor all participated in a video conference. The presenters were Scott Walker from WDSU television and Bill Symonds from Harvard University, formerly of Business Week magazine. Scott Walker was live at Riverdale. He spoke to the students about life as a broadcast journalist. Then Bill Symonds spoke about being a print journalist via a skype feed set up at Riverdale. After that the students from each school were allowed to ask questions. My students liked the Q and A best.

The picture below gives the view that the students and presenters saw of Patrick Taylor via the Polycom system. That's me standing up and looking kind of goofy. 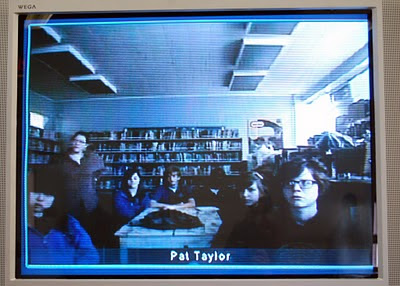 Here is a shot of Scott Walker live at Riverdale and Bill Symonds on Skype. 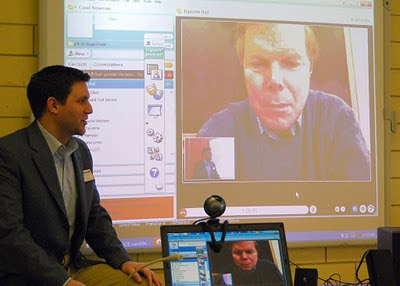 On Monday, my library book group used the new PolyCom system to talk with the book group at Higgins High School. The strange thing about the PolyCom system is that we could only view Higgins. We were not able to see ourselves, so we did not know what they saw of us. When someone was talking at Taylor, I did not know if the Higgins group could see the speaker. I can move the camera, but I don't know what the camera is "seeing."

Here is a photo of what we saw when we met with Higgins. They view the feed on a television, so that is why they are squeezed together on the sofa. You can see the PolyCom system  in front of the projection board. 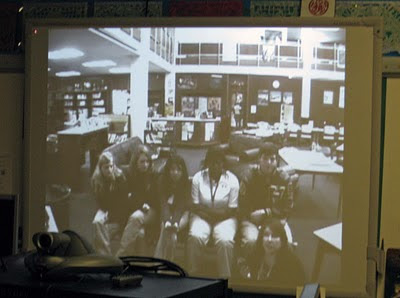