January 19, 2012
Last night was a real treat. I took a couple of former students to dinner, and then we went to see the touring John and Hank Green show. John Green is the author of some of my favorite young adult literature titles. He is on tour for the New York Times bestselling book The Fault in Our Stars or TFiOS as he likes to abbreviate it.

The brothers are making 17 stops on this tour. At each stop they are performing at a venue of around 500. There were sell outs in the 6 cities before New Orleans and though NOLA didn't sell out, there were over 450 people in the audience last night. I was blown away because I knew so many of them. I did not see any librarians that I knew, but the audience was made up of mostly teens and 20 somethings. So there were a lot of my former students there. Every time I turned around, someone else was calling out "Ms. Kahn" to me. That made it a lot of fun. John and his brother Hank created a Youtube channel called the Vlog Brothers. I have seen some of the videos, but I don't follow it. So I missed many of the references that they made. Oh well, that is the curse of getting old. You can't keep up with pop culture. 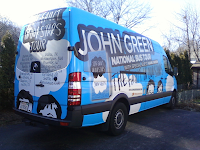 John started the event with a reading from the book. I can't wait to dig into it because it tells the story of two teens and their heroic fight against cancer. As a cancer survivor myself, I am intrigued to hear about treatment from a teen's point of view. The book is all about heroism. John said that he began forming the story when he asked himself if a person dies young can they live a heroic life. He believes you can.

Hank is a singer and the creator of DFTBA, which means Don't Forget to Be Awesome. This is the tenet of the nerdfighters. Anyway, he sang a bunch of songs last night. My favorite of the evening was Book Eight, where he laments that the epilogue of HP 7 is garbage, and JK Rowling needs to write an 8th book in the series. 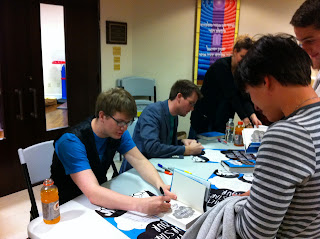 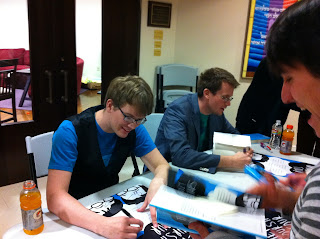 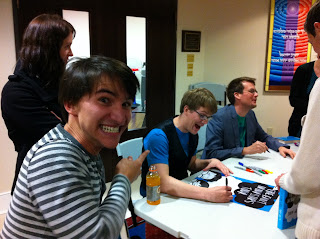 The books were pre-signed, but I decided to stay to get my books personalized. I was able to get a few close up shots of the guys. Chad, in the striped shirt, graduated from PFTSTA in 2009. He was an active member of Bookmarked and spent a lot of his free time hanging in the library.

By the way, you can listen to Susan Larson interview John Green on WWNO's The Reading Life.