@Mediajunkie Speaks about Working on the Web

May 02, 2012
Monday was the first day back from a week long spring break. I know; it is late in the school year for spring break. This is especially true because school in Jefferson Parish ends on May 24th. Having a late break meant more teaching time before those pesky standardized tests. Having this late break also meant that I was off from school and could visit the New Orleans Jazz and Heritage Festival guilt free last Friday.
The Jazz Fest is why I am posting today. My husband and I have friends who live in Palo Alto, CA and who have visited us for the past 20 years to attend Jazz Fest. This is the first time that I decided to ask Christian if he would mind talking to some of my students on his last day in the city. Christian Crumlish has worked in Silicon Valley for many years, and he has had to reinvent himself each time his career takes a different path. I thought that he would have a lot to say to the students at Patrick Taylor. I was right. 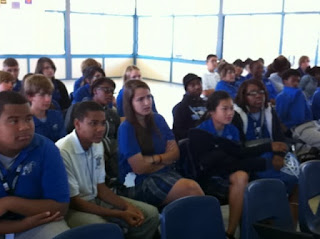 Christian had some statistics, like the fact that the dot com industry will need 15,000 workers yearly for the foreseeable future. It is nice to hear that an industry is expanding. He also explained that many of the workers in his field did not get a computer science degree when they graduated from college. Christian thinks it is more important for workers to have good communication skills, the ability to be flexible and the willingness to keep learning new things. He also explained the importance of a digital portfolio. All of the companies that he has worked for expect to see one at a job interview. Kelly Maher, the teacher whose classes attended the talk, always asks her students to create a digital portfolio. It was gratifying to hear that these portfolios are actually used in the real world. He gave the students a list of the various job titles that he has had over the years as well as other job titles in the field. He believes that by the time the students are in the work force those titles will have changed again. Currently, Christian works at Cloudon, a new startup, as a product director. Who knows where he will be in five years. The kids had some questions about programming, but mostly they were soaking his words in. 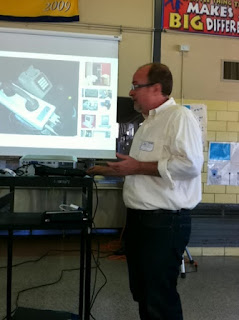 Then on Tuesday morning as I was driving to school I heard this on NPR. The discussion was the value of a liberal arts degree in today's tough economy. Yes, it is expensive to go to college, but Andy Sheenan, the provost at Wellesley College, says that a liberal arts education that teaches kids lifelong skills of how to think and how to be adaptable in whatever job they end up doing is actually more important now than ever. Hey, isn't that exactly what Christian said that he was looking for when he hires? 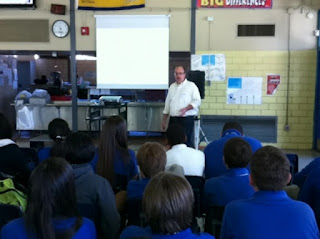 Which gets me to 21st century skills and the school wide learning outcomes on which the students at Patrick Taylor are assessed. There is no way that we can prepare our students for the job market that they will face in ten to twenty years. However, we can help the students learn how to communicate, think critically, collaborate effectively with their peers, and use technology appropriately. That is our job. Along the way, they are going to learn some history, science, math, English, foreign language, and art, but the content may be forgotten by the time that they are 25. The 21st century skills are lifelong and can be used to build a successful career and personal life. Guess what? You can't test those skills on those pesky standardized tests.

Christian thanks for coming to PFTSTA and thanks for affirming what we have been saying to parents and students for the last few years.