May 03, 2012
On Tuesday, May 1st we joined tens of thousands of students around the world as Rick Riordan broadcast live from the Rosicrucian Egyptian Museum to kick off the release of the latest in the Kane Chronicles, The Serpent's Shadow. All of the sixth and seventh graders sat in a classroom with their lunch to enjoy the show. You can see them below. 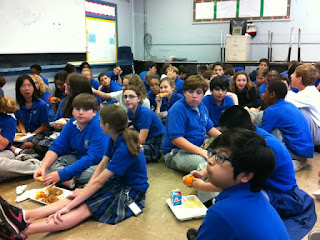 As the program started, we had trouble with the sound. The volume would only go up so much and with a room of 80 kids, it was hard for them to concentrate on the show. However, the kids are big fans of Riordan's. About half had read the previous books in the Kane Chronicles series. Probably all of them have read one or more of the books in the Percy Jackson series and/or the Heroes of Olympus series. These books fly off the shelves, and there is always someone in the middle of all his works. I am a big fan of Greek and Roman Mythology, so I have read the Percy Jackson books and the Heroes of Olympus. I have not had time to read the Egyptian mythology inspired Kane Chronicles. Riordan explained that the time period of the Egyptian gods and Greek and Roman gods was roughly the same. At this point in time, he does not plan to write a story where Percy Jackson's world and Carter Kane's world intersect, but you never know. 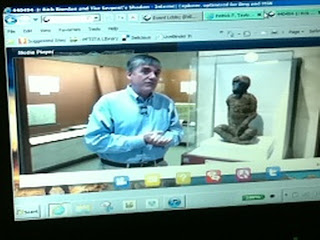 Riordan made his way around the museum showing the students various Egyptian artifacts. You can see a mummified monkey in the picture above. He also described what life was like back in the days of the pharaohs in Ancient Egypt. The museum has a tomb, and Riordan took his handheld lamp to show us what it looked like inside. Very cool. 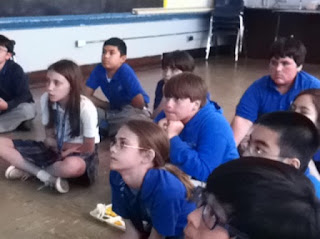 The webcast event occurred during the lunch period. All the students began the lunch period watching, but after twenty minutes, we gave them the option to stay or go. There was a dedicated group of 18 who decided that they didn't mind the low sound; they wanted to hear what Riordan had to say.