July 20, 2012
I have already blogged about the awesome award that I won from the American Association of School Librarians, a division of the American Library Association. The official photographs were released last week, so I want to post them here as I like to use this blog as my professional portfolio. On June 25, 2012, I was given the 2012 Information Technology Pathfinder Award at the secondary level. The picture above shows the cover of the program from the event. The picture below is the program page from the IT Pathfinder award. I won the secondary division of the program. This amazing librarian from Minnesota, Sally Mays, won the elementary division. It was an honor to win with Sally. She is so dynamic. I love meeting librarians with energy like hers.

Each award presented at the ceremony was sponsored by a different vendor. Follett Software Company sponsored the IT Pathfinder Award. However, it was Chris Schubert, Director of Marketing at BWI/Follett Library Resources who is pictured below with me as I receive the award. 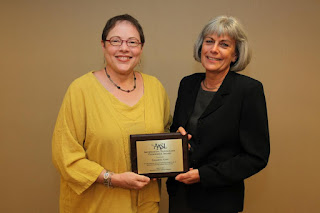