Lauren Myracle's books are very popular in my school library. When Bookmarked received an Advanced Reader's Copy (ARC) of Shine last year, I knew that I wanted to read it. We get so many boxes of ARCs that I can't begin to read even half of them. I try to save time to read a few authors that I love. Shine is a very different kind of book for Ms. Myracle. It is definitely for the mature teen as it deals with a hate crime and homophobia. Cat, the main character, has some secrets of her own, but she is loyal to a fault. She believes that she must solve the mystery of who attacked her former best friend, Patrick, because the sheriff wasn't going to do it. There is lots of intrigue in this story as Cat's friends and family try to hide what they know. Cat soon realizes that everyone has faults, but she plans to keep at it until she finds some answers. This story is riveting and many of my teens thought so too. 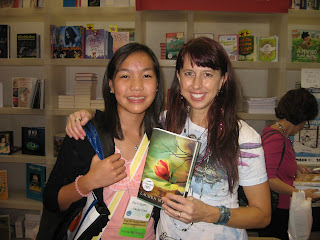 One of my students wrote a review of the book that we sent to the publisher, and they were so impressed that they sent it on to the author. When ALA met in New Orleans in June of 2011, the student got to meet Ms. Myracle in person and received her very own copy of Shine. The author is standing on the right in the above photo.

Here is what the student thought about the book:
"As Shine demonstrates your typical rural Southern background, the coming-of-age story is fresh and the strong characters can be related with the reader and may even act as an inspiration. It is hard to not imagine this book too soon become a movie as the story was very well developed and easy for readers to follow and also make their own theories pertaining to the mystery in the story. Teens would not be disappointed with a story that is so realistic, including almost every genre and component that a teen can relate to."
What did you like or not like about the cover?  Did the cover reflect the contents?
"I like everything about the cover, as it represents the coming-of-age story and the main character shining for her and for those who she cares for. The way that that is the only flower blooming on the branch shows that even if the character was alone, she still shined through others."
Describe the most compelling aspect of the book.
"The most compelling aspect of the book was how the narrator would react towards the mystery. I’ve read other books from Lauren Myracle which made me want to read Shine. Shine is very different from most of what she writes, which made me more curious of how the story would turned out. But, I was not disappointed of how well done the story was developed, as well the characters of the story. I liked the idea of including the newspaper article in the beginning of the book for the readers to capture the idea of the mystery. I also enjoyed the little romance the narrator was able to experience, as well as her self-discovery of many, many strengths. Lauren Myracle, thank you for yet another great read!"

If you want to hear more about Shine, then watch this episode of Get Reading: