February 18, 2013
I am such an author groupie. To me, meeting the authors that I read is like meeting a Hollywood star. I am so in awe of what they do. There are librarians who become writers, but that will never be me. I can write in this blog, but fiction is not something that I can do. My imagination just doesn't work that way. 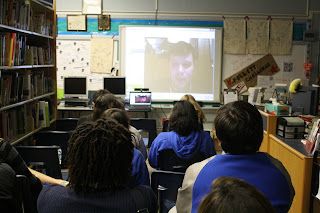 I have met Corey Whaley, author of Where Things Come Back, several times. I just adore him. In October, I saw him at an event in Baton Rouge, LA and asked if he would visit us at PFTSTA when he returned to Louisiana. He recently moved back to the northern part of the state but driving to New Orleans is a hike. His schedule just wasn't going to allow a face to face visit, so I opted for the next best thing, Skype. He readily agreed. 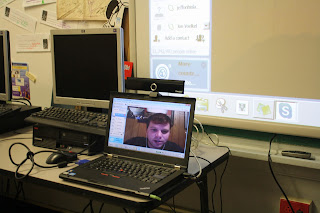 Bookmarked meets every Monday during lunch, so that is when we scheduled our Skype session. Corey didn't really have anything planned, and neither did we. I started the ball rolling with a question about Perks of Being a Wallflower by Chbosky. I had recently seen the movie, but I knew that Corey was a big fan of the book and the author, and many of the students in the room were too. Corey explained that the book came out when he was 16, and as a library helper in his school, he got first dibs on new books. When Perks arrived, he was intrigued by the cover and ended up loving the book. He said that he had never read books with characters who were so honest with who they were. I think it is great that this thirteen year old book still resonates with teens. More Bookmarked members had seen the movie than read the book, but many have it on their to read lists. 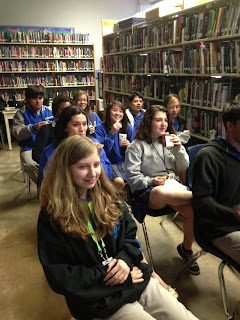 We also talked a lot about characters because the characters are so important in Corey's book. He explained that Cullen, the protagonist in Where Things Come Back, is based on a version of himself. He called it semi-autobiographical because Cullen lives in a small town and is quite cynical and sarcastic like he is. In his second book, which is in the edit phase, he created a character that was less like himself and less likeable. He says that he enjoyed writing a character who is a bit of a jerk. He is not allowed to reveal much about his next book, but he hopes to see it published in the spring of 2014.

We had such a good time that some of the students stayed much longer than the planned 30 minutes to hear what else Corey had to say.

Find more pictures of this event on the library website here.