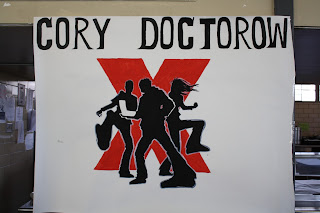 Cory Doctorow traveled straight from the airport to PFTSTA today to speak to the 135 members of the high school. I was thrilled to have an author who would be interesting to the boys. He has a wonderful talk that he has given at all the previous stops on his tour, but that did not deter him from letting the students see how passionate he is about technology, privacy, freedom of information access and a whole slew of Internet issues that weren't even in our consciousness twenty years ago. 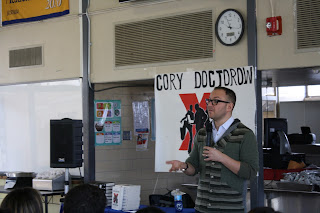 Some of the students said that he really didn't talk about his books. In essence he did. All the issues that are real to him including his stories of schools that issued laptops to students then spied on those students at home, companies that rented laptops then spied on their customers in compromising positions, and the US government prosecuting citizens who violate the computer fraud and abuse act are all included in his fictional novels about Marcus Yallow in some way. His books are set in the near future, and some of the technologies described in the books are definitely available now but others are not but could be soon. 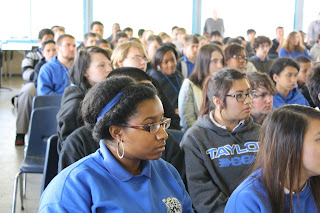 He also talked about his friend Aaron Swartz who was an Internet activist. Aaron was indicted for downloading journal articles by the millions from JSTOR from the servers at MIT. Aaron thought this information should be available for free. Aaron, only 26, killed himself in January of 2013, two years after his initial arrest. Cory wanted the students to know that suicide does not solve your problems and that no matter how depressed you get, it is important to seek help. He explained that he is using this book tour to talk about suicide and the need for prevention. 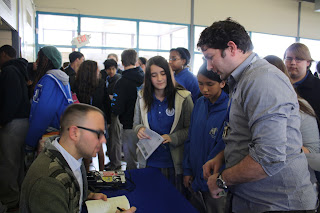 Cory does not talk down to the students at all, and some of what he said was over my head, but the students really seemed to get it. So many of them clamored to talk to him when it was over and bought a book for him to sign. You can hear more from Cory and about his books by listening to this interview by Susan Larson on The Reading Life from WWNO. If you want to read his books online for free, you can find Little Brother here and you can find Homeland here. Craphound is Cory's website, and he is editor of the blog, Boing Boing. You can watch a talk that he gave at Flyleaf Books in Chapel Hill, NC a few days before he was in New Orleans. Look for more pictures of this visit on the PFTSTA library website.

We would like to thank Judith and Tom at Octavia Books and the people at MacMillan for making this visit possible.
author visit authors books cory doctorow Homeland Little Brother YAlit Young Adult Literature