All Packed Up and Ready for the Move West!

June 03, 2013
It took many days of heavy lifting and moving to get all 6700 volumes packed away as well as all the other equipment, computers and supplies. I had lots of assistance, and I hope that I can enlist some of that aid on the unpacking end, too. 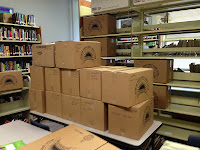 The picture above shows you the old library as the books get packed for the move. At this point in the process, I didn't think that it would ever get done. I was doing my yearly inventory while I packed so it was slow going. Lucky for me, once I finished inventory, I could corral some alums who were finished with college for the semester and were willing to give me some time to help with the packing.

Once the boxes get sent to the new site, I don't think that I will be looking back with any fondness for the old place. The building was not suited well to the school, and the library was grossly inadequate in size. At the end, I literally had books piled on top of books with no where to shelve them. On the other hand, I love working at Patrick Taylor Academy. The teachers and administration are great to work with, and the students are wonderful.

You can see from the picture above that our school is really moving south, not west. However, if you know New Orleans at all, then you can understand that the current location of the school is on the Eastbank of the Mississippi in Jefferson, LA. The new school is located on the Westbank in Avondale, LA. With the widening of the Huey P. Long bridge, the commute from the Eastbank will be made so much easier. PFTSTA draws students from the entire region, though most of the students live in Jefferson Parish where the school is located. The Jefferson Parish school district spans both sides of the river which is pretty common around here in southern Louisiana. We knew in 2006 when we moved into the dilapidated school on Jefferson Highway that the school would be moving to a brand new facility one day. It is just that we did not know that it would take seven years to make that move.

The school is not quite finished. The principal has had tours through the new school numerous times, but none of the teachers have seen the inside yet. I am anxious to see the library. I don't even know what the furniture is going to look like. It is hard to wrap my head around setting up a brand new library when I haven't seen the space. Since construction began January 2012, I have tried  to visit the site at least once a month. It has been fun to watch it grow from dirt and pilings to what it is now. We will be opening in the new site in August no matter what because a charter school has leased the old building. Lots of pictures of the new library to come in future posts. 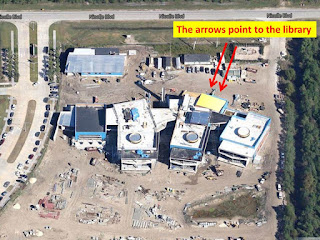 If you visit Google maps and type in the address: 701 Churchill Parkway Avondale, LA, you will see this aerial view of the school. I have marked the location of the library. A lot has happened to the project since this picture was taken. The trailers have all been removed, and the concrete parking lots have all been poured. The blue that you see is covered in a silver tone and the school is painted a dark terracotta. It really is going to be a beautiful place to work. I will have lots of natural light and room and more room and storage and an office. It is going to be heaven.