October 28, 2013
Last week was Spirit Week at PFTSTA. Each day the students could wear outfits fitting the theme of the day. Thursday was Throwback Thursday. Those planning the activity envisioned students choosing a decade and dressing from the 60s, 70s or 80s or anytime before that. However, some of the students interpreted it to mean a throwback during their own lives. They came dressed in flannel pajama onesies. I thought that was clever and thinking outside of the box.

On Friday, it was character day. Most of the characters that I saw walking around the building live in video games or save the world as super heroes. I grabbed a couple of pics of characters found in the pages of books. Of course, those would be my favorite types of characters. Below is a student who took her character from Cassandra Clare's Mortal Instruments series. She is a shadow hunter. 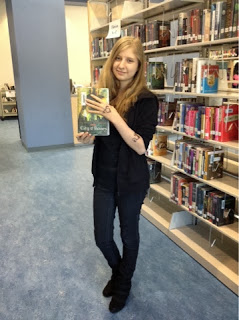 At every school, there are students who would like their school to be a little bit like Hogwarts. So when character day arrived, we were bound to see a Harry or two roaming the halls. Below is a senior enlightening his statistics class about the magical aspect of numbers and data. 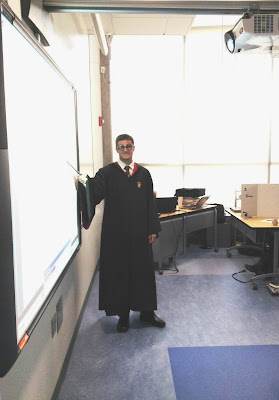 One of our new teachers, Maggie Grindstaff, really got into the spirit all week long. There were several Waldos lurking around the building, but I captured a pic of Mrs. Grindstaff who let us know that Waldo is hiding out at Patrick Taylor Academy. Where's Waldo was first published in 1987 when I was an elementary school librarian. I had all of the books in my old library. I don't have them on the shelves of the PFTSTA library, but I am happy to see that Waldo is still a well-loved character. 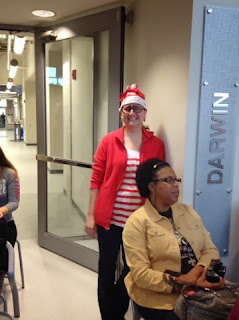