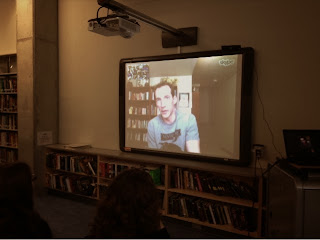 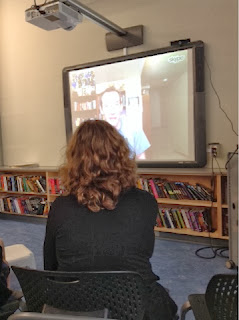 On Monday, November 18th, the members of Bookmarked had the opportunity to talk with author, Todd Mitchell, via Skype. Todd's newest book, Backwards, was published last month. One of my students reviewed the book for SLJTeen, and the author and I made contact through that connection. I encouraged more students to read the book, and I read the book . 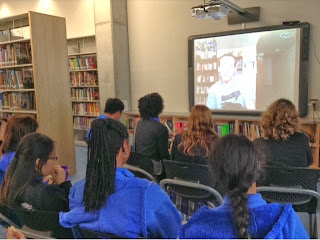 The students who had the chance to read the book were very curious about Todd's motivation for writing the story in the way that he did. In the book, the main character is living backwards inside a character who commits suicide. I am not giving away any spoilers because the book begins with the suicide. Todd told us that he will never write a book again with time shifting. He had to meticulously go through and add foreshadowing without giving away important plot points. There was lots of shushing throughout our discussion because the students who had not read the book yet wanted a chance to read it without knowing the final outcome. 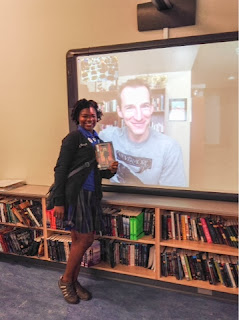 The author's main motivation for writing Backwards came about when a couple of young people whom he knew through teaching at Colorado State killed themselves. He wondered what fictional young adult ]literature was out there that addressed suicide. He found quite a lot, and he commenced reading. In his mind, all the fiction that he was reading either glorified suicide or was extremely depressing, there was not a story that emphasized the prevention of suicide. By writing this book, Todd became more compassionate towards the suicide victims whom he knew personally. He believes that anger from the family and friends of the victim does not help heal the hurt. 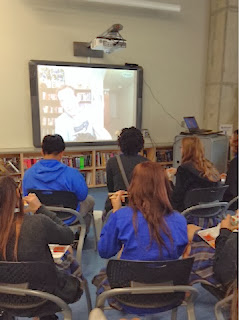 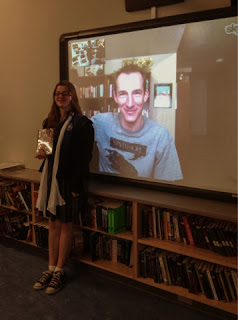 The picture that you see below is the manuscript for Todd's newest book which is a paranormal romance with a guy protagonist. He explained that he thinks guys like that genre as much as girls but would prefer to have it written from a boy's point of view. He asked my students if they agreed. They did. This new book will run 500 pages or so which is twice as long as Backwards. Todd wrote Backwards as a way to take a break from this long one. My students were glad that he took that break. 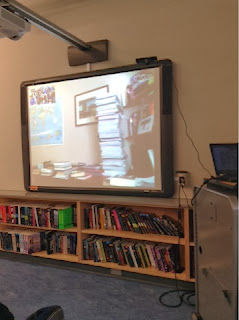 Thank you Todd for allowing us to visit you and your office for 45 minutes. The students had such a great time and kept talking about you and what you said long after the Skype was over.
authors Backwards Bookmarked Skype Skyping Todd Mitchell