Motto for Mock BOB: May the Best Book Win!
It did: Eleanor & Park by Rainbow Rowell 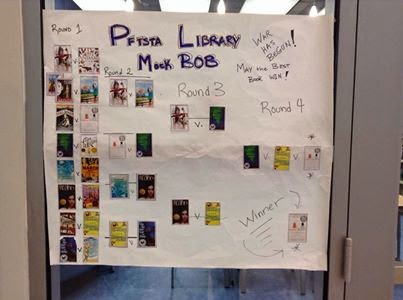 We started the Mock BOB at PFTSTA on March 10th. It took a month to get through 15 battles in four rounds. In Round 1, there were eight battles that were fought live during lunch in the commons area. Students stood up to speak as a champion for their book. For Round 2 and 3, the students picked their selections online. In Round 2, the champions wrote a brief pitch for their book, but in Round 3, the champions created a brief video. The events brought some excitement to the library and with multiple copies of the original sixteen books, students eager to read the books that their friends were defending could check them out and read throughout the month of battles.

Since this was the end of a long process, we decided that this battle should be live like in Round 1. The final battle was scheduled on Thursday, April 10th. The books in the final round included Far Far Away by  Tom McNeal, The Thing about Luck by Cynthia Kadohata and back from the dead was Eleanor and Park by Rainbow Rowell. Student defenders had 90 seconds each to try and convince the audience to vote for their book. After both lunches and the votes were tallied, we ended with two books in a tie. So I made an executive decision and created another online survey for students to select their favorite book, and I included all three books in the voting. By the way, the winning book was one of the titles that was tied in the original vote for this round.

When all was said and done, I asked the participating students if they would want to do this again next year. They all said yes, but they want to boost participation. I could not have agreed more. So look for us again next March to see how we make our Battle of the Books bigger and better.

Thank you School Library Journal for spurring us on to engage in such a fun competition. Open here to read all about which books the celebrity authors chose as their picks in the official SLJ BOB.
Battle of the Books BOB books Cynthia Kadohata Eleanor and Park Far Far Away Mock BOB rainbow rowell reading SLJ The Thing About Luck Tom McNeal