Students Create a Quiz with Flippity

At the beginning of the semester, I read this post describing how to create a Jeopardy-like quiz game using a Google spreadsheet and Flippity. I thought this would work really well with a social studies class. I approached Mrs.Hampton, who is teaching 6th grade world history this semester, to see if she wanted to try using this tool with the students to make a quiz. We really wanted the kids themselves to create the questions, so we knew that we had to wait until she had taught them several units before they would have enough knowledge to create the questions for the quiz. We also decided to make the categories of art and architecture, family life, land forms and climate, religion, rulers, and science and medicine rather than the categories by country so that it would not matter how far into the textbook she taught before the planned activity. The students could ask questions about Mesopotamia, Egypt, or India. The logistics for this took some planning. At first we thought that the students would write the questions on paper, and I would type the text into the Google spreadsheet. As I thought about it, I realized that this would have been silly. The students should be typing the questions. I had a concern that the students would somehow ruin the template by making a serious mistake when typing, but we came up with a plan that in the end worked very well. 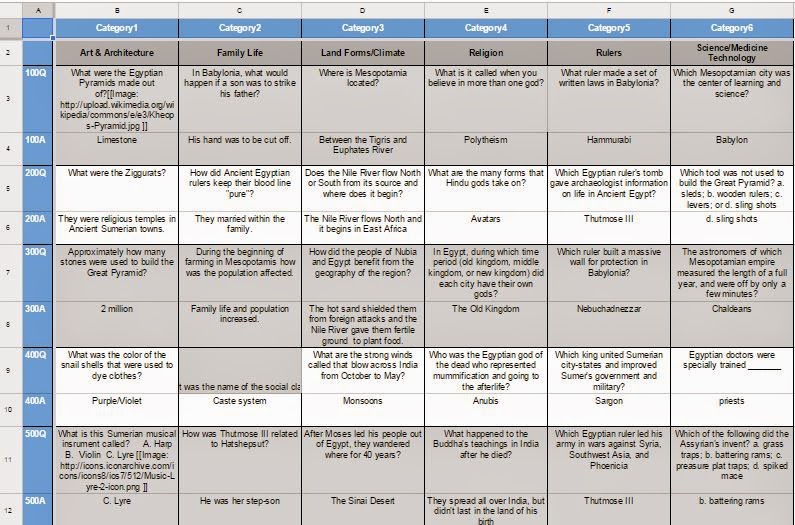 The teacher divided the students in each class into six groups of four students. Each student in the group had a textbook  In each group there was a recorder who wrote down the questions, and a typist who typed the questions into the spreadsheet. As the group created their questions, the teacher and I moved from group to group approving each question or offering suggestions on how to improve a question. The students had the freedom to decide how many points each question would be worth. Once the questions were approved, the typist could get to work on adding their questions to the spreadsheet. The students did make some spelling and grammatical errors. I just went back and tried to fix the errors, but in the end, even I missed some of them.

We spent almost an hour on developing the questions for the quiz. Then two days later we played the game which also took about an hour. Since the teacher had two classes, first period played the board created by second period and vice versa. When the groups began to play, we gave them the following rules: one person in each group would be the spokesperson; the group could not choose a question from the category in which they wrote questions; only one group would have a chance to answer any one question; and the winning group would win a small prize. That meant that every group had the opportunity to answer 5 questions. We gave them about 20 seconds to confer, but we were not hard and fast with that rule. Since it was such a successful activity, we decided to do it again when the students need to review for the final exam.

Technically, this was not a library-related activity, but I found the tech tool, and I was happy to work with the teacher and the students to make the activity happen. The library being a bit roomier than the classroom made it easy for us to move about as the students worked in groups. Would the teacher have done it without me? Maybe, but collaboration is collaboration no matter what form that it takes. My job is to be there as a resource, and in this case, it worked quite well.