April 02, 2016
For Teen Tech Week, I wanted to create some kind of contest where I would provide a grand prize. The contest would be designed to have students submit some sort of written piece, and then I would randomly draw two names for the grand prize winners, one from middle school and one from high school. I like the idea that the winners are selected randomly and that just by entering the contest all students had an equal chance to win. Thinking about it, I decided that I would ask the kids to submit a review of a book, movie, or game that they would like to recommend to their friends. I gave wide parameters of what they could review. The students had to submit one paragraph with a brief summary and one paragraph explaining why they would recommend the book, movie or game to their friends. I created a Google form for them to submit, so it was easy to share on the library website and in emails. The students chose from new and old and below is a pie chart showing what they chose to review. It was nice to see that 47% of the reviews were for books.

I also asked the students to give "if you likes" about the book, movie or game. So, if you like action and adventure, then you would like the book that they reviewed. Here are the percentages of what the reviews were most like.

Several students wrote multiple reviews, but I only published one review per child. You can read the reviews here on the library website. 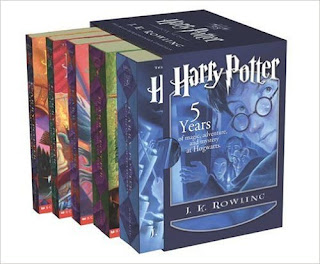 You will see that on the review page, I published a review by seventh grader, Julia Hutto, for Carry On by Rainbow Rowell. She submitted several reviews to me, and I wanted to share one with you here because it says so much about how books touch the lives of the children who walk through the doors of our libraries every day.

"Harry Potter is about a miraculous adventure of a boy named Harry attempting to destroy the great Lord Voldemort. Harry finds out how his parents died, how he's actually a wizard, and what's up with the strange lightning bolt scar he's had on his forehead since before he can remember. While destroying the great evil that is Voldemort, Harry finds the meaning of friendship, the power inside of himself, and the importance of being brave. Can Harry manage to not only save himself but also the rest of the wizarding world? The fate of an entire world rests on the shoulders of a small boy named Harry who lives in a cupboard under the stairs.

I cannot begin to express the importance of this book series and the impact that it has had on my life. I have grown and learned with Harry, Ron and Hermione. Without this book series, I would not be a reader, and I would not have half the friends that I do now. I would not know what I would do or be without having known Harry Potter. And for that, I am eternally grateful. The story of Harry, what Ms. Rowling went through to succeed with this idea, and how amazing her life is now because of it is truly inspiring. As a huge fan of this book series, I can recommend it to anyone brave enough to take the adventure. Put on your cloaks, grab your wands, and get ready for the experience of a lifetime."