Visit with Mark Alpert Via Skype and Solving Tech Issues 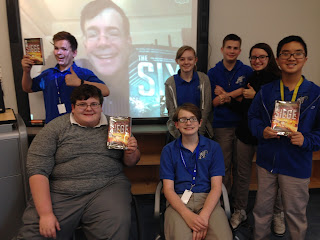 Bookmarked Jr. Edition had a skype planned for November 2nd with author, Mark Alpert. Alpert requested that I do a test with him the day before to make sure everything was working. On the 1st, students had the day off, but teachers were at school. About 30 minutes before the appointed test skype, I booted up my laptop to open skype. There was an error message, and so I went to I. T. for a fix but found it closed. Since I couldn't use skype on the laptop, I grabbed my ipad and plugged it into the interactive white board to call Alpert. The audio was good on both sides as well as the video. We chatted a bit about the students and his books. I knew that the 8th graders were going to find his interests in science and the way he melds it into his science fiction fascinating. 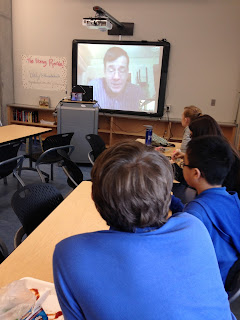 On the 2nd, I found out that I could use skype on the laptop, but I had to type in the password for the school system's filter to access it. I set up my laptop in the usual way ten minutes before our scheduled skype, but the computer would not access the camera and microphone that I plugged into it. That caused audio issues when we finally connected. He couldn't hear us. Then I tried to hook up my iPhone for the skype because I could put it on a tripod, and the phone's camera could pick up all the students. We couldn't hear him while using the iPhone. Finally, I grabbed my iPad and leaned it up against the laptop as you can see in the pictures. We had done the test with the iPad and all worked, and I should have known to try it from the beginning. We lost about 10 to 15 minutes of our scheduled session, but he stayed on the call for longer than planned, and I held the students in here to finish the discussion. 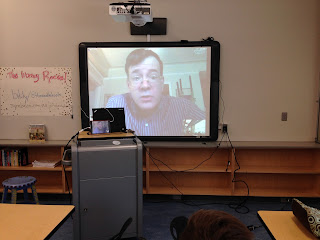 In the end, it was a success, and technology is an awesome way to connect with the world. Yet, you do need to be prepared for something to go wrong. Always have a back up plan. 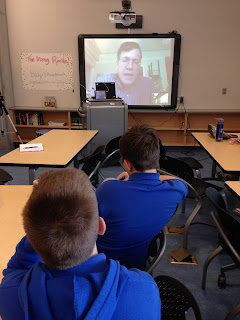 The 8th grade book group is mostly boys, and so Alpert was the perfect choice for the skype. He has a real passion for science and uses it through his fiction to entertain. He tries to base all his scientific claims in his fictional work on real science. When you get to the essence of the story it is not really about robots and Artificial Intelligence (AI). It really is a case of the morality of making changes to humans using machines and prolonging life with machines. Really, what defines a person? What is a person's identity? The pioneers in his book have had all their thoughts downloaded into a machine. Are the pioneers the same as when they were human teenagers or are they a copy? Are you your brain or are you your body? In the book, Alpert made a very conscious decision to make the voice of his main character, Adam, be the same from human to robot. Adam's father is thrilled to still have his son no matter what his body looks like, but his mother finds it repulsive. For her, without the body, her child was gone. Though the group certainly did not have answers and neither did Alpert, the students' focus during the skype session illustrated to me that Alpert's ideas were definitely food for thought. and made for a really good discussion. Find more pictures and details about the skype here on the library website. Thank you Source Books for making this event possible.