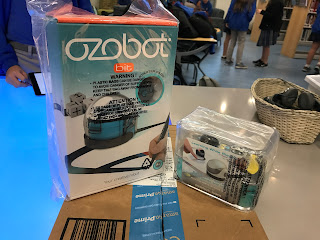 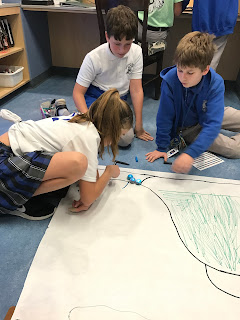 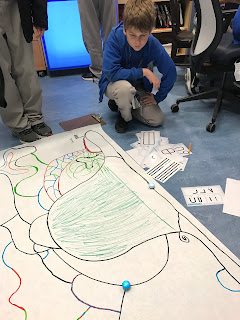 The library has had three Sphero robots in the makerspace for about a year. The students love how fast they can travel. They will have them on the floor weaving in and out of each other's path, up and down the ramp, and singing and dancing to a catchy tune. The Sphero robots are controlled by any of several free apps found on the iPad. Some of the apps just control the robots' movements, other apps offer more in the way of coding with blocks very similar to Scratch. As popular as the Sphero are in my library, I wanted to buy another kind of robot that might appeal to a different kid. 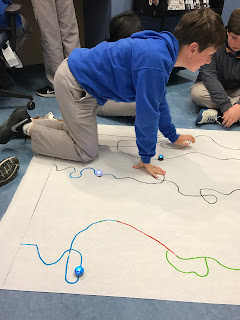 The Ozobots are cute and tiny. They are only about one inch by one and a quarter inch. I said that they were small. They would work great on a table or desk, but my students have them running on a huge sheet of bulletin board paper about 3 feet by 5 feet, so the floor is the only place for this to work.


Ozobot in Action 3 from Elizabeth Kahn on Vimeo.

The Ozobots are programmed to follow color codes to make them change speed, alter direction or blink lights in various colors. The idea is to "build" a track that the Ozobots will follow. They can be controlled by a free app on an iPad with many possible tracks that the user can pull up and use with the Ozobot. Some kids like pairing the iPad and robot together. Since the iPads we have are minis and the robots are so tiny, this a one person endeavor. 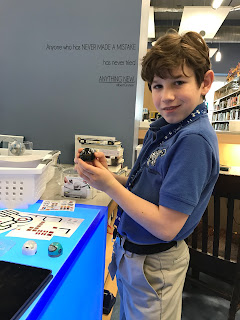 Several students are working as an unofficial team to design a track on large paper. Regular markers in black, green, red and blue are used to create the codes. If the line is too thinly drawn, the Ozobot stops moving. That is an easy fix. The starter kit that I got had some code on vinyl, but those would only stick on the laminated cards that I made not the huge sheet with the track. Cruising Amazon I found some stickers just for the Ozobot. An eight year old came up with the idea after receiving a robot as a gift, and he developed the stickers into a product to be sold. The stickers with the color codes can be added to the track drawn by the students. The sticker packages have just over 200 stickers, and I bought three packs. They should last for awhile. 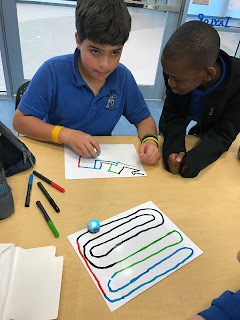 Ozobots may have been designed for a younger user because the coding is so easy, but my middle school students have really taken a shine to them. Even one of the 9th graders said that she would like to have one of her own.


Ozobot in Action 2 from Elizabeth Kahn on Vimeo.

Everyday it seems that the kids have figured out something new about how they move or how they can manipulate their movements. At $59 each, they are affordable, and you really don't need much extra gear to have fun just paper and markers.