Annual 9th Ward Trip with 7th Grade is Another Hit 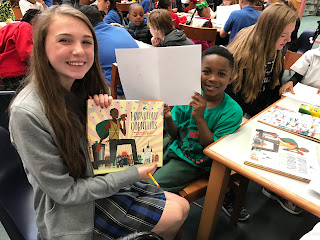 I have blogged about every field trip down to the 9th Ward in New Orleans that I have made with the seventh graders. The very first one  in 2011 was the best field trip that I have every been part of as a teacher, and over my many, many years of teaching, I have been on lots of field trips. This year, we made some changes to both the unit that is taught at school and to the trip itself.  This unit with the trip is very intense because there are so many pieces and parts, and there are several teachers handling the various responsibilities so that it all gets done on time, but this also is tricky making sure that all the loose ends are tied up by the time we board the buses.

We have a 7th grade ELA teacher on staff who is not only new to the school but also new to New Orleans. She was more than willing to be part of this project, but she had some ideas of how the unit could be better incorporated into her ELA program. First, she wanted the students to create a digital slide show with what they would learn about Hurricane Katrina and the Ninth Ward, then she wanted the students to learn how to conduct an interview like a journalist and talk to a family member about their Hurricane Katrina story, and then she wanted to change up the literature that we share with the first graders at King Charter School in the Ninth Ward. Those were a lot of changes, but all great ones that would help enrich the historical aspect of this unit.

The unit begins with the reading of Jewell Parker Rhodes' Ninth Ward. Jewell was scheduled to visit New Orleans in October and come to our school to talk to the 7th graders. We had the students read the book in anticipation of her arrival. Unfortunately, for us, her first grand child arrived just when she was scheduled to visit. The students had read the book, but the unit didn't start until after winter break.There was a bit of a disconnect to the literature when we started the unit. We were able to surmount that, but we plan to do better with the literature part next year. The students came to the library do begin research on Hurricane Katrina. I have created a Livebinder for this activity, but I remade it this year to change the focus. In the past, the Livebinder's focus was on the places where we would tour during our scheduled field trip. Since we were only going to make two stops before visiting King Charter School, the new Livebinder was designed to give historical background to the Hurricane's devastation rather than a focus on the stops of our tour of the Ninth Ward. Our current 7th graders know little about Hurricane Katrina as they were infants at the time, so this unit allows them to learn about an event during their lifetime but one they don't remember.

Another aspect of this unit is our collaboration with students at a school in Iowa. Several years ago, I met Shannon Miller from Van Meter, IA at a conference. Ever since we have been making connections with the middle school ELA teachers at Van Meter School. Shannon is no longer the librarian there, but we have kept up the connection, none the less. We were able to Skype a couple of times with the students. The students in Iowa completed the Livebinder that I created, and all of the students made comments on three different Padlets that you can find on the Livebinder. We plan to share some of the slide shows created by my students with the students in Iowa.


The Field Trip:
We thought the changes that we made would make the trip work better in terms of the teachers monitoring the students as well as for the students who would be making videos at the two tour stops. We also changed the literature that we were going to bring to the 1st graders at King Charter School.

In the Ninth Ward, two of the most significant changes to the landscape since Hurricane Katrina can be found in the Musician's Village in the Upper 9th and the Make It Right houses in the Lower 9th. The students may be close to being teenagers, but they still love the chance to play on the playground in the Musician's Village. The houses created by Brad Pitt's foundation are so unusual that the students are captured by the unusual colors, shapes, sizes, solar panels, and levels that make each house unique. At both stops, students worked in threes to create video segments describing what they saw. I will share some of these video segments in a later post.


Finally, we reached King Charter School where the students performed Marvelous Cornelius by Phil Bildner. This book is about a real man and tells what happened to him in New Orleans after Hurricane Katrina. The backdrops that the students painted were amazing especially considering the short amount of time that we had to create them. This field trip was made possible by a service learning grant from the local Brown Foundation. We were able to bring a copy of Marvelous Cornelius to all 78 first graders along with crayons and a blank book. The 7th graders helped their "book buddy" write a story of someone who is a hero to them. The teachers at King shared their snacks with our students. 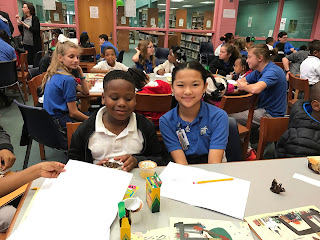 It was another outstanding activity that is a total collaborative effort. I hope that we can continue this unit and improve on it as the years go by.