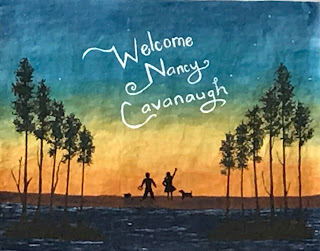 On Monday, September 25th, we had our first author visit of the school year. Author and former 3rd grade teacher and librarian, Nancy Cavanaugh, came to talk about her newest book, Elsie Mae has Something to Say. The book is set in 1933 in the Okefenokee Swamp in Georgia. Nancy explained to the students how she was inspired to write the story--a television documentary. However, it was a trip that she took to the swamp 20 years ago that gave her the push to write a book about a place and time that doesn't exist anymore. 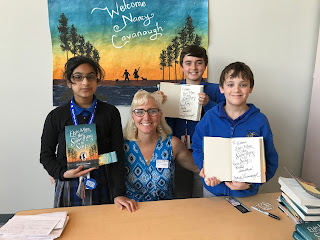 It took her a long time to get the story right because she started her research two decades ago, and the book was published in early September 2017. At first, she was going to try and write a non-fiction picture book about the swamp because her inspiration began with a documentary and book called Okefenokee Album by Francis Harper. When that didn't work she tried her hand at a book called. Henry James and the Hog Bandits. That never got published either. When she created Elsie Mae, she hit on a character with such spunk and sassiness that she became the main character in her book about the swamp. Henry James made it into the book, too, as Elsie's cousin. Yes, there are hog bandits on the loose, too. This is a book filled with adventure, mystery, and humor. The author's attention to detail about the swampers' lives paint a picture in your mind that made all of us want to take a trip to see the alligators of the Okefenokee. 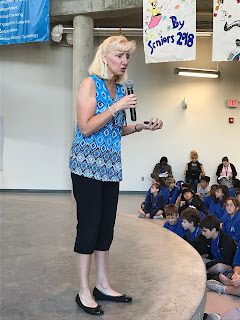 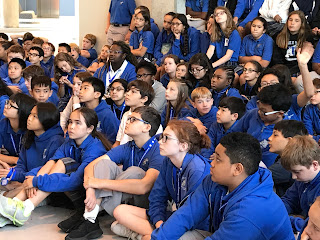 After her visit, the students had lots to say about the program. They didn't know that it took so much effort to get a book written including both research and experience. They really liked hearing about her trip to the swamp to see it in person and how what she experienced there made it directly into the book. Much of the action takes place on the front porch of Elsie Mae's grandparents' house and that porch looks just like the front porches of the cabins that Cavanaugh saw on her visit. Also, some of the swamp is made up of islands that are dry land where the swampers built their homes, but there is also lots of boggy land that has to be tread on carefully. Swampers would use the pole that helped propel the boat as a plank to walk on when they encountered marshland. Cavanaugh explained how this trick worked when Elsie Mae did it in the book. Not only did she write a good story, but she also gives the readers a glimpse into what life was like almost a 100 years ago on the islands of the Okefenokee. 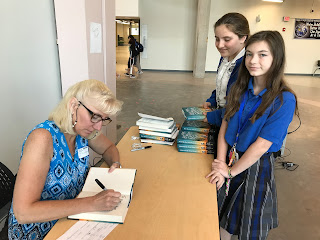 You can visit the PFTSTA Library to check out the book or your own local school or public library. We want to thank local booksellers Octavia Books and the publisher Source Books for making this author visit possible. You can find lots more pictures of Cavanaugh's trip to PFTSTA on the library website.
author author visit Elsie Mae has Something to Say Nancy Cavanaugh Octavia Books Source Books