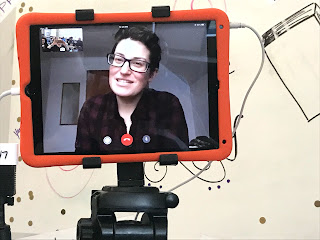 Today, Bookmarked, the high school book group had the opportunity to chat with YA author Cori McCarthy. She is delightful, and both the students and I were on the edge of our seats drinking in everything that she had to say. Though several of her books piqued our interest, we met today to talk about her contemporary novel, You Were Here. This one she said is the most personal to her. She lost a classmate when she was in 8th grade right before the school year started. The adults told them that his death should not be discussed. All these years later, her emotional connection to this former classmate was the impetus to write the book. 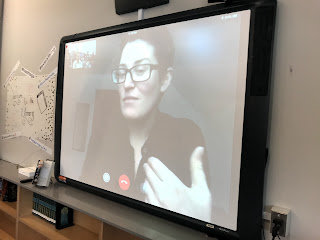 This book is told in five voices. When she began writing, it was very difficult for her to put words on paper for the character who was mute for most of the story. She decided that his voice would work well in illustrations. She was able to convince her editor to hire an artist to turn his part of the story into a graphic novel. She was thrilled with the results. McCarthy believed that the illustrations did not need to be explained and that her readers were sophisticated enough to be able to follow what was happening. I loved reading some of the voices in text and others in pictorial form. It helped to mark  the different personalities of the five main characters. 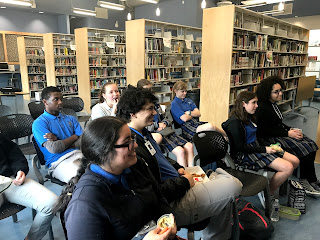 Seeking recovery from loss is one of the major themes of this book, and the characters engage in some very risky behavior that is called Urban Exploration to find redemption. McCarthy explains that she was hesitant to put real places in the book in fear that readers would seek out these abandoned man-made structures and possibly be harmed. Some of the sites mentioned in the book did once exist but are now gone like the amusement park. Others like the mental health facility was a place that she explored when she was in college. She did describe how students could go urban exploring right in their own home by visiting youtube or following Abandoned America on Instagram.

Though McCarthy claims to be introverted and that early in her career she had difficulty connecting with other people, especially those in the arts. Her presentation to us did not reflect any apprehension  with socializing with people that you do not know. She was upbeat, answered all the questions that the students posed, and was extremely gracious. This was a five star virtual visit. We want to thank Cori for spending time with us today and her publisher, Source Books, for making it happen. You can find more pictures of this visit on the library website. 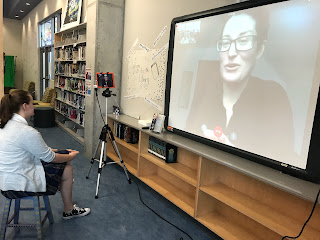 Traditionally, after every virtual visit and before signing off, I have the students stand by the screen and get a picture of them standing "with the author". For some reason today, I totally forgot to do that, and now I am kicking myself. I can't believe that I didn't capture that picture. Those are some of my most favorite pictures in the library.