Teen Tech Week 2018 was Another One for the Books

With three lunches, it is no longer possible to plan activities during Teen Tech Week (TTW) that are very time consuming for the students or take lots of extra pairs of hands to pull off. That is okay, because I think that I have figured out ways to simplify our planned activities but still offer five fun activities in the library for each day of the week. Also, I had to move TTW to accommodate for the fact that I was at a library conference the week before. This meant that I had to have everything ready to go before I left town for the conference that included lots of advertising to the students so that they would be ready for TTW when I returned to school that Monday.

I plan a different activity each day at lunch and usually have some other passive game that might be available all week in the library or online. We always start the week by showing animated shorts. This all began because TTW is scheduled near the Academy Awards, and I like to show the appropriate animated shorts that have been nominated for an Oscar. The short that won the Oscar for 2018 was Dear Basketball by Kobe Bryant. The kids loved it.  It is only five minutes, so we also watched Lou and Garden Party which were both nominated for an Oscar as well as some other shorts that I thought the students would get a kick out of. Though this is a very simple activity to execute, it is quite popular with all grade levels. 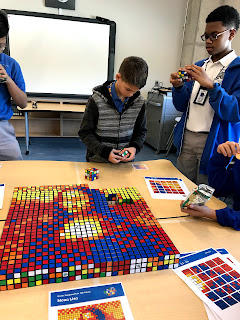 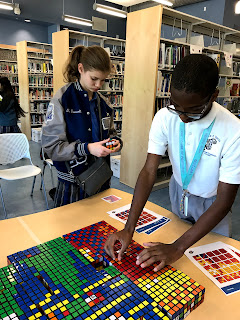 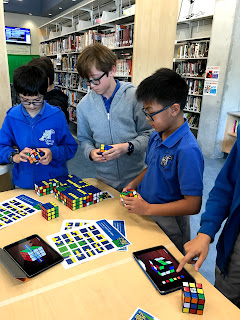 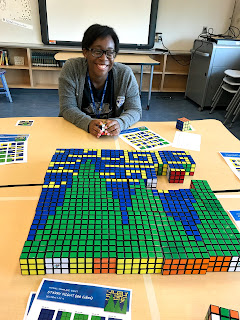 A couple of months ago, I found a post on one of the librarian Facebook groups about a Rubik's Cube borrowing program. I thought that this would be an awesome activity for TTW. Educators and youth directors can borrow large sets of cubes for a six week period from youcandothecube.com, and all you have to do is pay the return shipping. It was so easy to apply to borrow a set. I chose 100 cubes because I thought that number would be easy to manage. The cost to return is going to be about $20. I downloaded several patterns for the students to follow and printed the patterns in color. The Mona Lisa and Starry, Starry Night have been the favorites. Two cubes have gone missing, and I am responsible for replacing the cubes if any are lost. I have two cubes that I ordered and are due to arrive next week. The 100 cube set works well on two library tables pushed together, and I have left them out beyond TTW since we only have them for a short period anyway. This also was an activity that all grade levels loved. 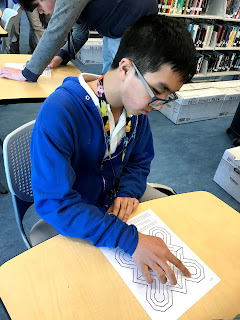 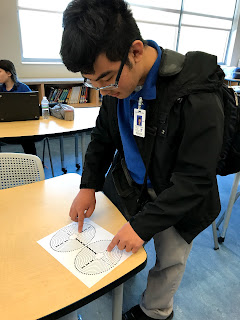 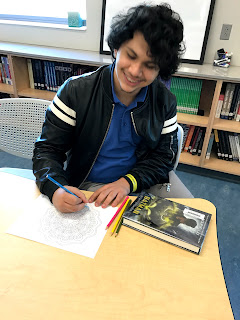 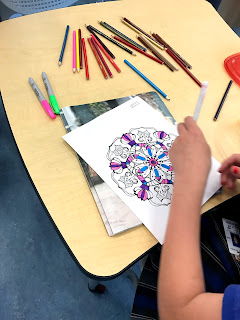 A few years ago, I did an anti-tech activity for TTW when I invited a friend who is an author and teacher of mindfulness if she would practice meditating with the students. I thought it was a hit, so I tried again by offering a choice of finger labyrinths or mandalas to color with colored pencils. I explained about how both activities can be relaxing an aid in  relieving stress. Though there were some students who really got into these, as a whole it was not that successful. I have left out the coloring sheets and colored pencils in our makerspace area for students to use, so I know that the sheets I printed will not go to waste. It just has to be the right time for the right student. 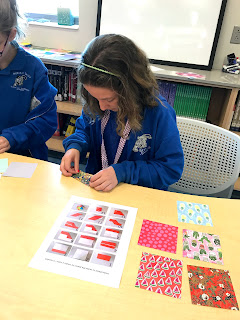 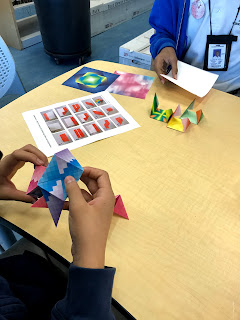 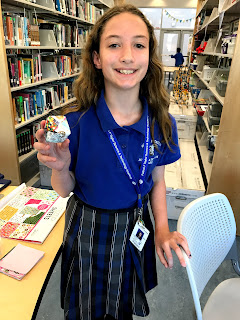 We always have some type of craft activity for TTW. I chose paper this year but wanted something that was movable. I found lots of cool ideas online, but we have 6th-12th graders and many students arrive in the library with less than 30 minutes to complete the activity. It had to be a craft that could be completed in one sitting and easy for all the grade levels. I found instructions for an origami cube which is made with six pieces of origami paper. That was doable in the time frame. Then I found instructions for an infinity cube that is made up of eight cubes. I figured that everyone could make at least one cube, and those who were interested could make eight and end up with an infinity cube. For these types of activities, I usually pull out the iPads and give the students a QR code to find the instructions. That never really works very well, so this time I copied the pictures from the websites and made an easy to follow sheet for the one cube and then the infinity cube. It took much longer than I anticipated for the students to make the one cube. So no one finished eight cubes in one lunch period, but I kept the materials available for the students. I have a 9th grader who is one cube short for his infinity cube, and a sixth grader who finished hers. Then there are other students who are in the process of creating eight cubes. The students who participated, and there were many, loved the colorful paper and the task even if they only made the one cube.

For the last activity in the library, I scoured the Internet for ideas of a game or scavenger hunt using a phone or tablet. I have done something like that before, but I wanted it to be different. I finally found a photo/video scavenger hunt that I adapted to fit our situation. It was a huge success during 6th/7th grade lunch and 8th/9th grade lunch. The older high school students could not be bothered; I guess that it was too much work for them during a lunch period. The students had to form a group of three or four and take enough photos or videos to reach 1800 points. When the team showed me what they did to earn the 1800 points, then all team members could take a prize from the basket. I created this form for the students to use. I had iPads ready for those who needed them, but I let the students use their own phones if they chose. It was great when they used an Apple device because they could air drop a copy of the photos that they took to me. Some outlandish  photos and videos were captured. For the students who participated, it was a real crowd pleaser.


I had one more activity online that I thought would be fun, and I got the idea from the Facebook Future Ready Librarians group. Someone had posted that she created a bulletin board with the first page of about 30 YA novels and classics. The students had to figure out the title of the book. She did not give a list of titles and neither did I. Because I don't have the wall space to create a display, I created a Google Form with name, grade, email, and then screenshots of the first page of 20 novels. I had gone to Google Books to find the first pages, and it was easy to capture a screenshot. I had never used the quiz function with Google Forms before, so I set the form to grade everyone's answer. Since the answers were text, and the answers I listed were case sensitive (unfortunately that is the only way to do it in Forms); I had to list all the possible answers for every title. Diary of a Wimpy Kid could be written many ways with letters in caps or not in caps. However, I still had to go through the answers because some of the misspelled or missed capitalized words were scored as incorrect. I was disappointed with only 40 responses, but it was the first time that I had done a quiz online for TTW. I think that some students must have gotten frustrated with it and quit before finishing. I didn't think that it was hard, but the students said it was.