I had been planning for the American Library Association's (ALA) annual conference in New Orleans for over a year. I was prepping the students in two of my book groups about what it would be like for them to spend a day with me at ALA, and if they wanted to attend, I made sure that they saved the date well in advance since many of them have camp, travel, or even work during the summer months. I was chair of the Young Adult Library Services Association's (YALSA) local area task force for this conference, so I had many duties throughout the week. I had not attended an ALA conference since Chicago in 2013, so I had booked myself solid from a pre-conference on Friday, June 22 until the afternoon of Monday, June 25. Then life happened.

I had to put my 91 year old mother in the hospital on the Tuesday before the conference. We did not think she was seriously ill, but she had been feeling poorly for weeks. She knew about the conference, and we planned ahead who would visit her and help her while I was busy at the Convention Center for four days.Then very early Thursday  morning, I got a phone call from the hospital. The next thing I knew, she was gone. So many emotions and so much to do.

On Friday at the opening session Michelle Obama was speaking. My mother, a true blue democrat, knew that I was going to hear Obama. I decided that I would do as much of ALA as I could handle. I did get to see Obama, and she was amazing. Though I was only close enough to watch her on a screen. If you want to hear what Obama has to say, you can fast forward through this video to about 20 minutes in to see and hear the interview.

Nine members from two of my book groups were going to spend the day with me on Sunday. My siblings were very understanding, and I was able to make good on my commitment to take my students. We met at 9AM in front of the exhibit hall. We had a little over two hours to spend getting books, meeting authors, and filling bags up with swag. As I expected, many of them wanted to go by themselves.Two of the nine hung out with me along with a librarian friend of mine and a parent who was helping me chaperone. The two hours passed in a flash, but everyone was loaded down with many, many signed books.


Then we headed upstairs to a room for lunch around 11:15. That wouldn't have been a problem, but it was an extremely long haul from the exhibit hall. Everyone had so many bags and many pounds of stuff to carry. YALSA provided pizza, salad, cookies, and drinks. Several publishers provided authors who speed dated around at each table so that every group got to talk to every author. I was impressed how enthusiastic the authors were to talk about their newest book since they had to give the same spiel over and over. The authors did not hesitate to answer every question posed by the teens no matter how strange but in the process seemed to really relish time spent in the company of their readers. I really believe that my teens read more and enjoy reading more when they have had an opportunity to talk to the creator of the books. I thank all of the authors for taking the time to share and listen to the kids: Deb Caletti, Neal and Jarrod Shusterman, Laurie Boyle Crompton, McCall Hoyle, C J Lyons, Allison McGhee, Andrew Smith, Caroline Tung Richmond, and Eliot Schrefer.


At 1:00 we all moved next door. The students were going to be talking to the YALSA Best Fiction for Young Adults Committee (BFYA). Every year this committee selects about 75 of the best fiction works geared to teens and publishes a best of list. During the Mid-Winter and Annual conferences local teens are asked to give their assessment of the nominated books. All of the teens there that day spoke beautifully, but I was especially proud of my students. The committee was blown away and asked if we would send comments from the teens throughout the year. The librarians on BFYA want the list to be teen friendly and not a list of books only liked by the librarians and adults who serve teens. Below are pictures of the students talking to the committee. 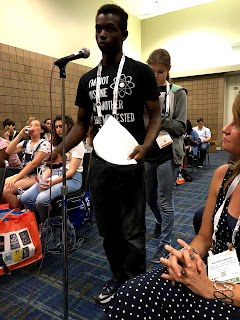 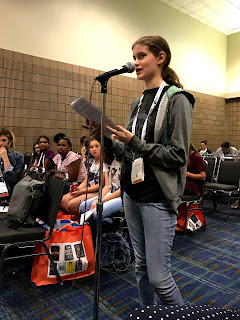 Teen Speaks Back at BFYA Session At ALA Annual 2018 from Elizabeth Kahn on Vimeo.


It was all over about 3PM. Several of my students chose to return to the exhibit hall, but most of them left to go home to begin sorting through all their goodies. Once done, the students told me that I had not told them it was going to be like this. This meaning a chance to get dozens of free books and meet dozens of authors while becoming totally overwhelmed by the experience. I tried to tell them, but it truly is an experience that you have to go through to understand. Those kids are so lucky, and I think once it was over, they realized it.