October 18, 2010
Today we kicked off Teen Read Week with a fantastic event. Scott Westerfeld talked to all of the freshman and sophomores about his new book Behemoth, second in the Leviathan series. It is an alternate version of World War I told from two points of view: the first a girl disguised as a boy so she could be an airman on a British flying ship as well as an Austro-Hungarian prince whose parents have just been murdered. He explained to the students about the illustrations, and how in 1914 when the book takes place, all novels had illustrations. He had lots of visuals from the book. The students were mesmerized (me too); as you can see by the picture. 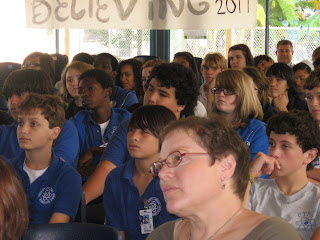 We invited Scott to stay for lunch. The library book group, Bookmarked, enjoyed an hour of visiting with him in the library while munching on shrimp poor boys. Below is a group of happily fed teenagers with one librarian and one author. 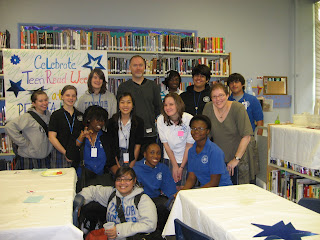 Zerhow Chan outdid himself with the welcome poster in reds, silver and gold. Just right to evoke the steampunk style of Scott's books. 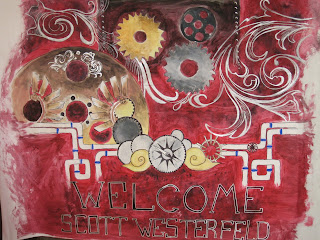 Scott's wife is author, Justine Larbalestier. When Scott goes on school visits, she usually spends her day in the hotel room writing. Since the room was not conducive to writing, she joined him at Taylor. While she visited, she signed her books in our collection. 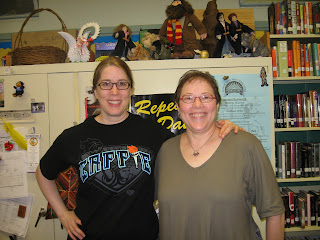