I Love the New Book by Riordan 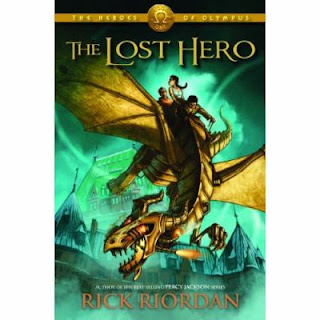 I often will read the first in a young adult series and end there. It gives me a sense of the author's style, and I can recommend the books to students based on the one that I have read. However, some series I get just as excited about the new volumes as the kids at school. Some of these books I won't let anyone check out until I have had a chance to read it. This would include books like the Harry Potter series, Hunger Games series, and the Walking Chaos series.

It happened again when Rick Riordan's newest, The Lost Hero came out a couple of weeks ago. I know that I am a little selfish, but I just had to read it before anyone else. I had just started it when one of my students told me that his dad had bought it for him. He didn't get to read it yet because his dad was reading it first. His dad told him that it was better than the Percy Jackson books. Even though I had read a couple of chapters, I didn't think that was possible. Now that I finished it, I think that I agree. The new characters had so much personality and took on their roles as demigods so effortlessly. I liked that. I am a big fan, and I recommend this to any mythology fans out there. It is a great adventure story with some humor and a lot of heart.