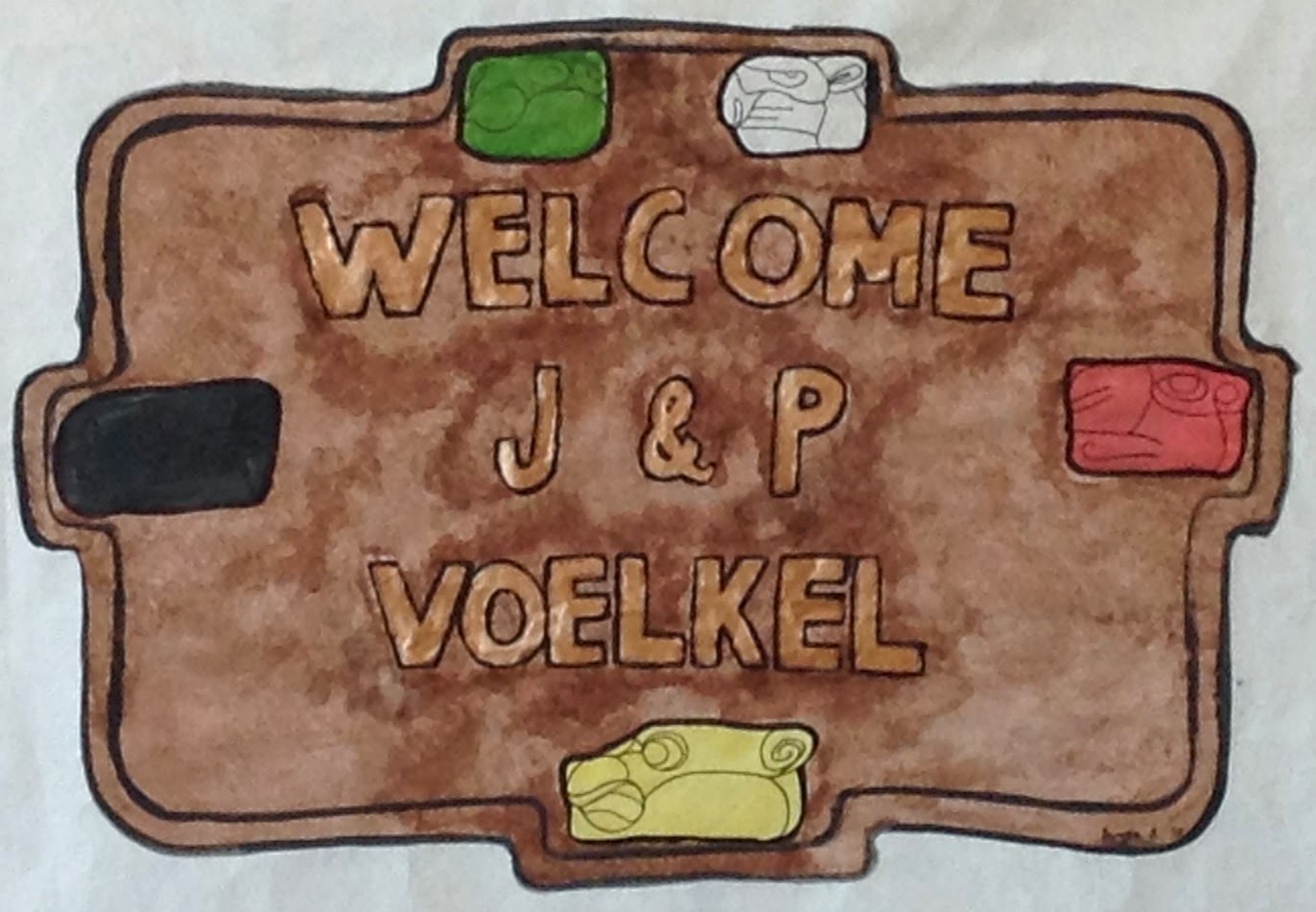 On March 17th, the middle school students were treated to a performance by authors Jon and Pamela Voelkel that kept the kids enthralled from the moment it began to the action-packed conclusion. The Voelkels have become friends of mine as well as friends of our school. They were traveling because the last book in the Jaguar Stones series was published last month, but their publisher, Egmont, sent them to the West Coast, not New Orleans. Since both New Orleans and St. Louis are featured in the journey that Max and Lola take to save the world from Ah Pukuh in the book, The Lost City, the Voelkels decided to plan a trip to our area on their own. I am so glad that they did.

Their visit began with dinner at Pascal Manale's. An uptown institution that specializes in delicious seafood. Not only did we have a great meal that night, but there was a celebrity sitting at a table next to ours. Singer, Harry Connick Jr., was enjoying a meal with his family. We really wanted to get a picture but did not want to intrude, so Lulu, the Voelkel's daughter, posed with the book she was reading.

The Voelkels had warned me that many of the activities and bits that they were going to share with my students included much of what we had seen on their previous two visits. Since the audience was made up of students who did not attend PFTSTA in 2010 and 2011, all that the Voelkels said and showed was brand new to this crop of 6th and 7th graders. Pamela introduces the students to the characters, Max and Lola, and the fictional aspects of the book. Like when Max disguises himself as a member of a rock band to hide out in book two. One of the highlights of the visit was the chance for so many students to get on stage with inflatable guitars to act out a little of their inner rock star.

Jon teaches a couple of students how to use a blowgun to destroy one of the death lords trying to destroy Max and Lola.

The Voelkels also share information about the Mayan culture. Jon grew up in Latin America visiting Mayan ruins, but as adults the two have returned to Central America with their own three children to study, learn, and get some fuel for the adventures their characters encounter when they meet the Mayan death lords in the books. I really liked some of the enrichments and additions that they made to the multi-media of pictures and video that they present to the students. Pamela states that the fictional Indiana Jones is her favorite archaeologist, but then she introduces several real life archaeologists and shows video of these adventurers describing some of their real-life exploits while traveling through jungles looking for artifacts. There are also plenty of pictures and videos of the Voelkels' trips. Jon eats some interesting creatures on their travels. At the end of their presentation, I made sure the students heard how Jon passed on the creatures that I had eaten the night before when I had joined them for dinner. Manale's is known for their raw oysters, and I never pass up a chance to eat them. Jon declined to taste, but Pamela popped one in her mouth and declared them tasty. 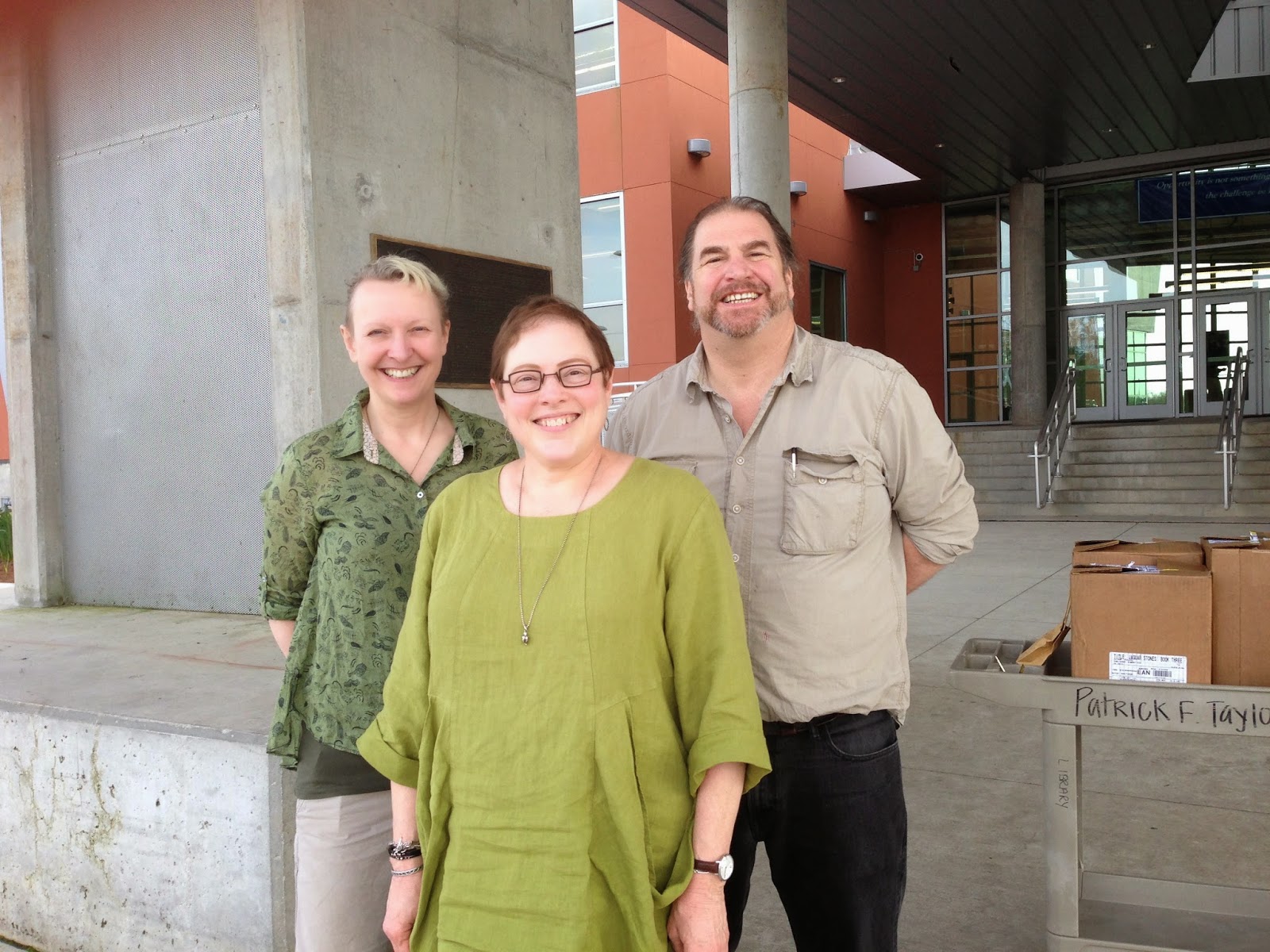 It was bittersweet to say goodbye to Jon and Pamela, but I had to wish them well as they are going to be spending the next few weeks traveling and sharing with other students across the country. Find more pictures of this author visit on the library website here.

More about The Lost City, the last book in the Jaguar Stones series:

When the Voelkels were researching for this book, they visited New Orleans to see where their characters would actually travel that made sense to the story and to the city itself. They really wanted to be true to the geography and culture of the city. I met with them on that visit, and I also consulted with them after their first draft on the pages about New Orleans. When the book arrived in its published format, I found myself in the acknowledgements. 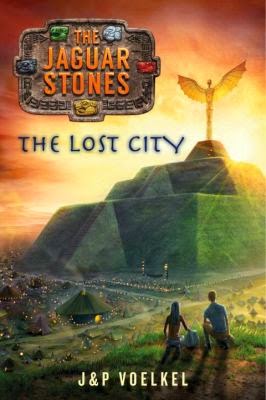 While searching on the web, I found a blog post where Pamela Voelkel was interviewed about the new book. During the online interview, she describes how I helped her find locations for her book.